Flights suspended for 35 mins due to low visibility. 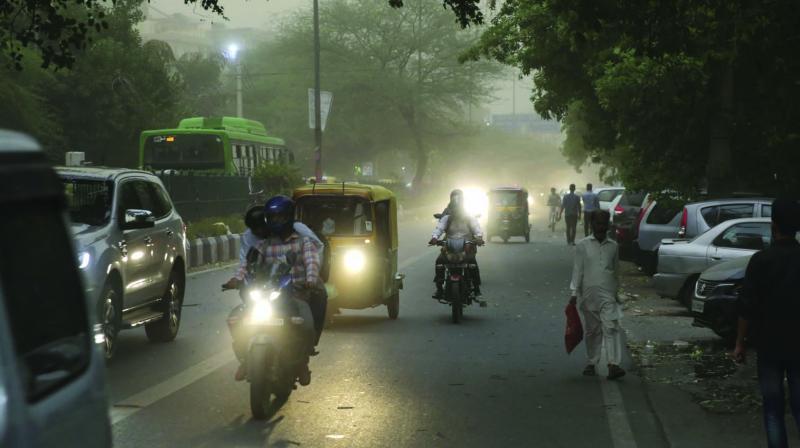 Commuters during a duststorm in New Delhi on Wednesday. (Photo: AP)

New Delhi: Thunderstorm and dust storm coupled with light rain brought the mercury down in the national capital, bringing the much-needed relief to Delhiites reeling under intense heat for the past few days. The air quality, however, continued to remain in the poor category.

The last departure at the airport was at 6.38 pm,” the officials said. Till 7.15 pm, total nine flights were diverted from the airport, they added. “The airport resumed flight operations at 7.15 pm,” they said.

The maximum temperature at Safdarjung observatory was recorded at 41.6 degrees Celsius, two notches above the season’s average. However, the temperature fell sharply to 29.8 degrees Celsius at 7.30 pm after the thunderstorm hit the city.

The minimum temperature was recorded at 31 degrees Celsius, three notches above the season’s average.

The weatherman has forecast partly cloudy sky and possibility of very light rain for Thursday. The maximum and minimum temperatures are likely to hover around 43 and 29 degrees Celsius respectively.

Private weather forecaster Skymet Weather said parts of Delhi and NCR could also see “heavy showers”. On Tuesday, the maximum temperature in the city was 44.5 degrees Celsius, five degrees above the season’s average.