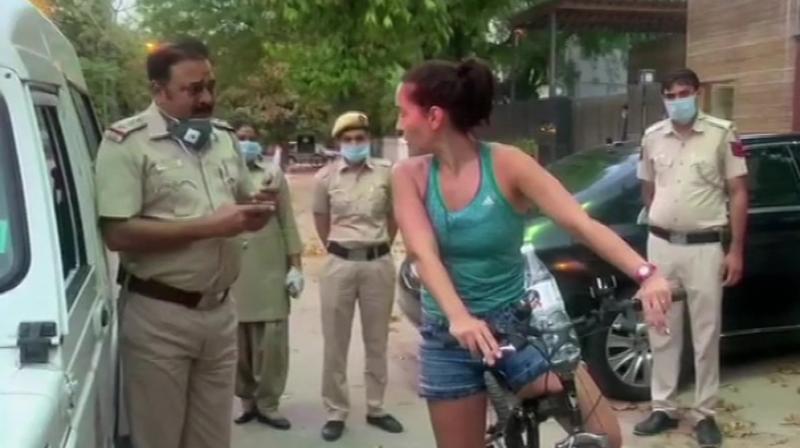 New Delhi: The Delhi police stopped a Uruguayan diplomat for not wearing a mask when she was cycling in the Vasant Vihar area of South Delhi. According to the police, the incident took place at around 6.30 pm on Saturday in Paschimi Marg.
“The station house officer (SHO) of Vasant Vihar, Ravi Shankar, along with his team, was patrolling in the area when they stopped the foreign national cycling in Paschimi Marg for violating the government orders imposed to contain the coronavirus,” said a senior police official.

In a video clip recorded by the police, the woman diplomat Valentina Obispo is seen standing her ground when the police officer told her that she was violating a government order by not a wearing mask. The woman said her embassy had received no such orders, and also noted down the name of the SHO, a senior police official said.

When asked to show her identity card, she refused. The entire incident was video-recorded by the police, the official said.

Obispo, head of administration at the Uruguay embassy, was stopped by the police after it received complaints from the RWA of some diplomats/foreigners disregarding the seriousness of the situation.

On being asked which embassy the diplomat belonged to, Obispo rode off on her bike saying, “You can’t say anything to me. You can’t ask me to wear a mask.”