The objective is to help the EDMC overcome financial crisis. 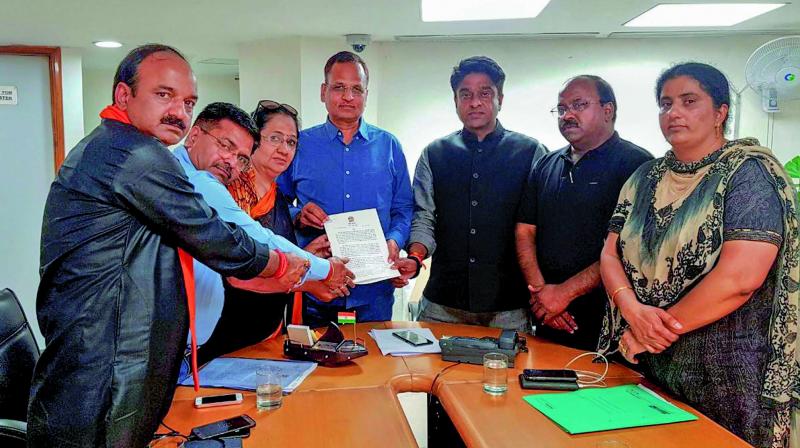 NEW DELHI: East Delhi Municipal Corporation (EDMC)  mayor Neema Bhagat and  BJP councillors on Monday staged a dharna at the Delhi Secretariat demanding release of funds as per the recommendations of the fourth Delhi Finance Commission and implementation of 5th DFC report. The objective is to help the EDMC overcome financial crisis.

Ms Bhagat said that due to apathy and party politics of the Delhi government towards municipal corporations, the EDMC’s financial position has gone from bad to worse thereby affecting development, maintenance of regular services and social works to be carried out by the corporation. The financial crisis has also led to apart from leading to delays in release of salaries or pension and other payments, including medical reimbursements and arrears to EDMC employees.

According to Ms Bhagat, the EDMC requires Rs 1,800 crore annually for payment of salaries, pension and other dues. This apart, Rs 1,500 crore is pending by EDMC towards its employees.”

“Since July 2015, the EDMC hasn’t released full terminal benefits to its retired employees, due to shortage of funds,” she said. The mayor urged the government to release Rs 9,125 crore due to it as per the recommendations of 4th DFC and to implement the 5th DFC report without indulging in politics over it as it is a matter of basic necessary civic services, livelihood of hundreds of families and development works of the capital.