How to protect your pets during Holi

Drinking coloured water can lead to liver problems in dogs. 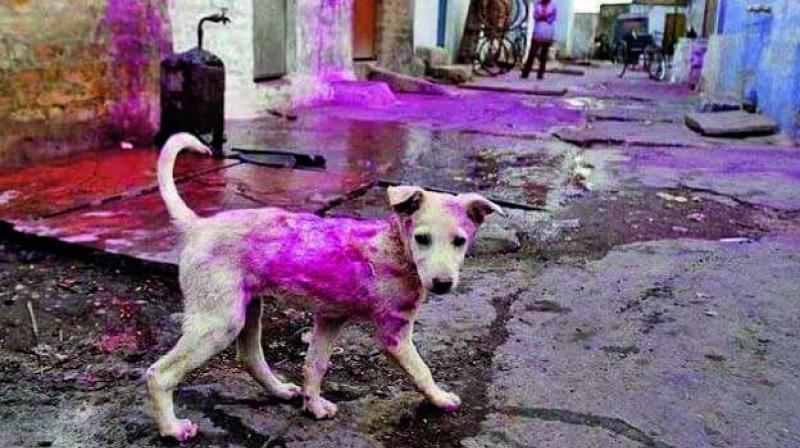 The colours used during celebrations are made of “toxic metals and dyes”, and unsuitable for animal skin.

New Delhi: It is important for people to understand that animal skin is different from human skin and that both pets and stray animals become victims of hooliganism during Holi, animal rights organisations said.

The colours used during celebrations are made of “toxic metals and dyes”, and unsuitable for animal skin. Animals like dogs do not have sweat glands, and their bodies end up absorbing the toxins, unlike human skin, which sweats to flush out the chemicals, said Pet Animal Welfare Society (Paws).

Dr R.T. Sharma of Paws said that stray dogs end up licking or drinking the coloured water, which can result in severe liver problems. He added that this must be stopped with increased sensitisation of the public. Friendicoes-SECA in Defence Colony, which has been spreading awareness against animal cruelty during the festival, will remain open on Holi to attend to any kind of emergency that might occur. The animal shelter will be providing facilities like ambulance and other emergency related services, along with a 24x7 functioning veterinary clinic in the advent of any mishap. The organisations suggested that while a “tilak” on the forehead of the animal was acceptable, it was advisable that they be kept indoors.

In case of accidental spills, they suggested an aggravated situation could be recognised by a change of behaviour in the animal, like increased restlessness and scratching, drooling or an aggressive flapping of their heads. In an article titled, Keep Animals Safe This Holi, the Mumbai-based animal rights organisation urged people to create awareness in their localities and sensitise children against “throwing powder colour or water balloons at animals”. “Kids may not realise that this frightens and hurts animals,” the article read. Besides the synthetic colours used during the festival, Peta also warned against letting animals consume “Holi sweets”. “Animals can easily inhale the coloured powder, which can cause nasal irritation and respiratory allergies or infections. Animals that ingest it while grooming themselves can suffer from stomach ailments or other illnesses or even die. Drinking water coloured by the powder can also cause hair loss and dermatitis in dogs,” the article notes.