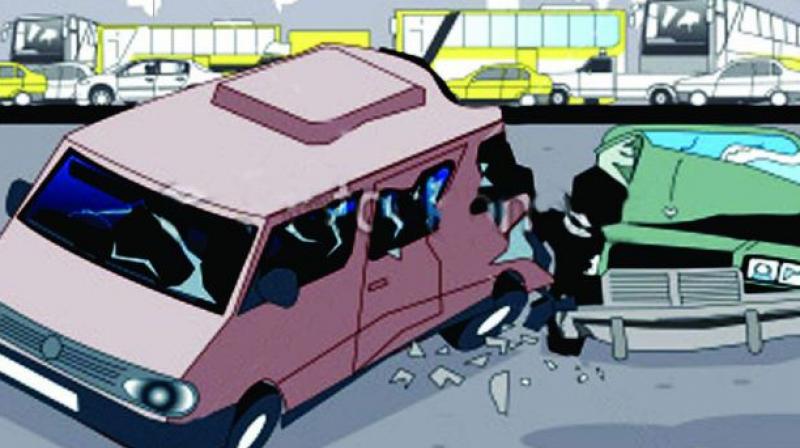 In January, a speeding BMW hit a WagonR Uber taxi near the Munirka flyover in South Delhi. (Representational image)

New Delhi: In yet another incident involving a high-value car, four persons, including a pregnant woman, were injured when a BMW car caused serial accidents and collided head on with a Maruti Swift Dzire car. It then rammed into an auto rickshaw and came to a grinding halt after hitting a boundary wall in South Delhi’s R.K. Puram area.

The incident took place around 8 am on Major Somnath Sharma Marg. The BMW driver, Rajat, who was allegedly under the influence of alcohol, has been detained and sent for medical examination.

The police said that Munni Data (28) and her husband Bitto Pal (32), who were travelling in the Uber cab, along with cab driver Pradeep (35), and Ram Chander (60), the auto rickshaw driver, were all admitted to the AIIMS Trauma Centre. The additional deputy commissioner of police, Chinmoy Biswal, said: “Munni Data and Bitto Pal had hired the cab from Noida to go to the Indira Gandhi International Airport. At R.K. Puram in South Delhi, the BMW hit the cab, which collided with the auto rickshaw. The car was coming from the Delhi airport side while the cab was headed towards the airport from Noida. The impact of the hit was so powerful that the front left portion of the Swift Dzire was badly damaged. As the BMW was speeding, its driver lost control after hitting the Swift and hit a parked auto rickshaw before crashing into a concrete boundary wall,” said a police officer.

A case has been registered at the R.K. Puram police station. The vehicles have been impounded. This is the second time in two months that a BMW has rammed into an Uber cab in recent weeks.

In January, a speeding BMW hit a WagonR Uber taxi near the Munirka flyover in South Delhi.

The same month, four people, including a woman techie, were killed in Ghaziabad when a speeding Audi rammed into an auto rickshaw they were travelling in.