Arvind Kejriwal to take oath at Ramlila on Sunday

There are clear indications that Kejriwal will retain all his six Cabinet ministers. 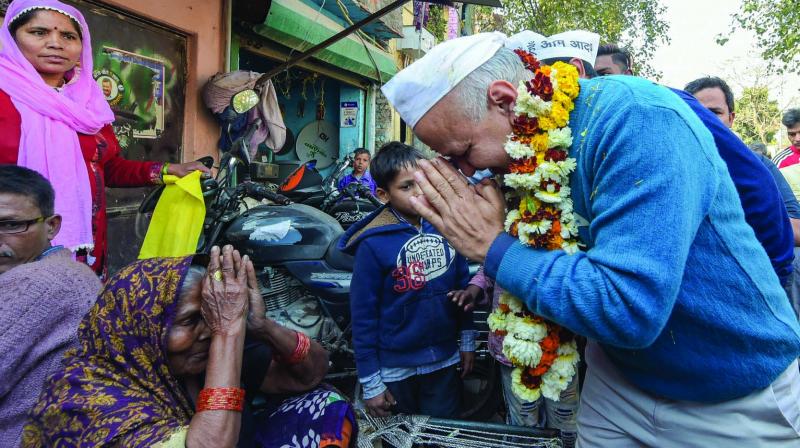 AAP leader Manish Sisodia during the “dhanywad yatra” in Pataparganj in New Delhi on Wednesday after winning the Assembly elections. (Photo: PTI)

New Delhi: Aam Aadmi Party chief Arvind Kejriwal will take the oath as Delhi’s chief minister at 10 am on Sunday at Ramlila Maidan in a grand ceremony that will be open to the public. There are clear indications that Mr Kejriwal will retain all his six Cabinet ministers. The oath-taking ceremony is likely to be attended by the chief ministers of several states, including West Bengal’s Mamata Banerjee, Maharashtra’s Uddhav Thackeray and Andhra Pradesh’s Y.S. Jagan Mohan Reddy.

This will be the third time Mr Kejriwal will be taking the oath as Delhi chief minister after scripting a spectacular victory in the Assembly polls, in which the AAP won 62 of the 70 seats. Along with Mr Kejriwal, the others likely to take the oath are his deputy chief minister Manish Sisodia and other Cabinet colleagues — Gopal Rai, Satyendra Jain, Kailash Gehlot, Rajendra Pal Gautam and Imran Hussain.

There is speculation over the inclusion of Oxford-educated Atishi and Rajiv Chadha, a prominent young face of the party, in the new Cabinet. However, sources said the AAP chief is unlikely to tinker with the existing combination and is set to retain all incumbent ministers.

Raghav Chadha and  Atishi will have a bigger role in the party in the future and they might also be given charge of some government-run bodies, an AAP leader said.

“The party leadership feels that retaining ministers in the outgoing dispensation, whose work has won the party a second term, is the best thing to do,” a source said. “They have played an important role in strengthening the party. Both of them were contributing to the Delhi government in different capacities as advisers before being removed by the lieutenant-governor, citing their illegal appointment,” he said.

After being elected leader of the legislative party by his MLAs at his residence, Mr Kejriwal met lieutenant-governor Anil Baijal  at Raj Niwas to discuss details of the oath-taking ceremony. Mr Kejriwal’s meeting with the L-G lasted for about 15 minutes. “It was one-on-one meeting. Mr Kejriwal discussed the formation of the new government with the L-G,” a senior official told this newspaper.

All newly-elected party MLAs have being asked by party leaders to ensure huge participation from their constituencies, according to party sources Wednesday.

The AAP won 62 seats in the 70-member Assembly, with the BJP accounting for the remaining eight, and the Congress drawing a blank.

Mr Sisodia, while addressing the media, said all Cabinet ministers will also take the oath along with Mr Kejriwal. He urged people to turn up in large numbers for the ceremony. Mr  Kejriwal has taken the oath as CM twice before at the same venue.

Lauding voters, Mr Sisodia said: “Heartiest congratulations to the people of Delhi. It has given huge respect to the politics of work.” Taking a dig at the BJP, whose campaign revolved around people who have been protesting against the anti-Citizenship (Amendment) Act at Shaheen Bagh, he said people had rejected the politics of hatred.

“Kejriwal’s work is a model of development. It has proved that patriotism means good education for your children and work done for the welfare of the people,” he added.