The police has recovered a suicide note apparently written by the man, identified as Rajesh Gupta (40). 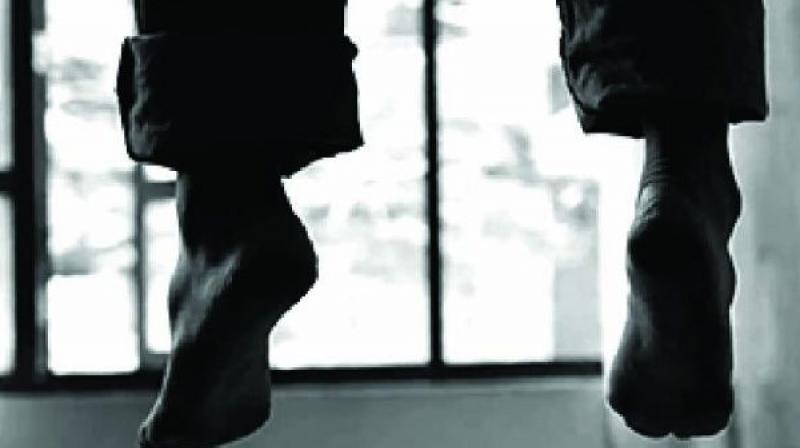 Husband was found hanging from an iron rod fitted in the ceiling of the room. (Representational image)

New Delhi: A married couple and their 14-year-old daughter were found dead under mysterious circumstances at their rented home in Outer Delhi’s Rajiv Nagar Extension near Begam Pur on Sunday morning.

While the bodies of the woman and her daughter were found on the bed with strangulation marks, the husband was found hanging from an iron rod fitted in the ceiling of the room.

The police has recovered a suicide note apparently written by the man, identified as Rajesh Gupta (40). The note was found from his pocket which said that he is willingly ending his family and nobody should be blamed for their extreme step. It also requested the police not to harass anybody.

The preliminary probe into the incident hinted that Gupta allegedly strangled his wife Uma (35) and daughter Shweta before hanging himself. The room in which they were found dead was locked from inside. Though the senior police officers do not suspect any foul play, they claimed that they will reach to a conclusion only after receiving the autopsy reports. A forensic team also visited the spot.

Deputy commissioner of police (Rohini) M.N. Tiwari said that the incident came to light when Gupta’s neighbours found his house locked and none of the three were responding to their calls. The Guptas used to wake up early and finish their morning prayers before 8 am every day. But when they remained indoors till 9 am, the neighbours became worried and asked Babloo, who lives with his family on the first floor, to check on the family.

“The room was locked when I came down. The door opened when I pushed it with some force. I was shocked to see Gupta uncle hanging and his wife and daughter lying unconscious on the bed,” said Babloo.

He alerted the neighbours and one of them called the police control room. A police team arrived and broke open the main door. The three were rushed to a nearby hospital where doctors pronounced them dead on admission. “The note, purportedly written by Gupta, did not have any details that could reveal that the family, Gupta in particular, were under stress or facing financial crisis,” said an investigator.

Their relatives and neighbours also claimed that there was nothing going on among the family members that could have forced Gupta to allegedly kill his wife and daughter and then commit suicide.

A native of Faizabad in Uttar Pradesh, Gupta moved to Delhi for livelihood some twelve years ago. He initially worked as a taxi driver but later purchased a tempo and transported goods of customers from one place to another.