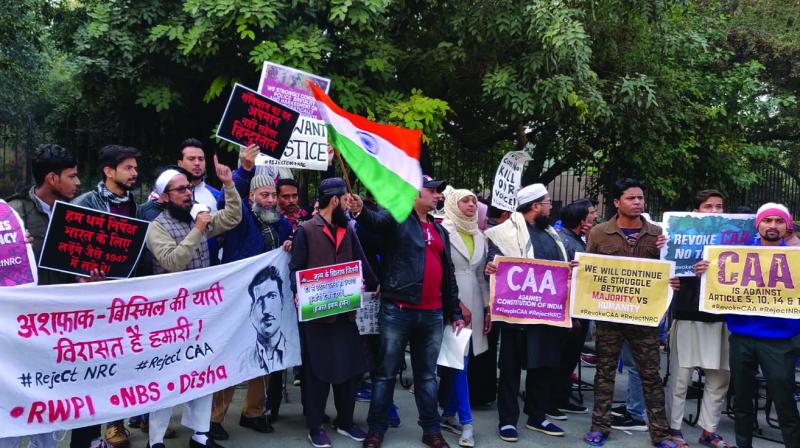 People of different faiths came together on Sunday to participate in a ‘sarva dharma samabhava’ ceremony at Delhi’s Shaheen Bagh, where anti-citizenship law protestors have been demonstrating for almost a month now.

New Delhi: People of different faiths came together on Sunday to participate in a ‘sarva dharma samabhava’ ceremony at Delhi’s Shaheen Bagh, where anti-citizenship law protestors have been demonstrating for almost a month now.

The inter-faith ceremony, where there was a traditional Hindu-style ‘hawan’ and chants of Sikh ‘kirtan,’ saw participants also reading out the Preamble of the Constitution and taking oath to preserve its “socialist, secular” values.

The concept of ‘sarva dharma samabhava’ (equal respect for all religions or peaceful co-existence of all religions) was popularised by Mahatma Gandhi during India’s freedom struggle against the British rule to promote inter-faith harmony.

Hundreds of protestors, including women and children, stayed put at the Sarita Vihar-Kalindi Kunj Road at Shaheen Bagh, on Sunday, as their movement for withdrawal of the contentious Citizenship Amendment Act (CAA) and a proposed pan-India National Register of Citizens (NRC) was set to complete a month on Monday.

Zainul Abidin (44) of Ghaffar Manzil had started a hunger strike on December 16 to press the demand for repealing the CAA and after a fortnight was joined by Mehrunissa (40) of Sarita Vihar.

Braving the harsh winter chill, a trio of elderly women, now famously known as the “Dabang Dadis” of Shaheen Bagh, too have been at the protest venue that has come up on the Sarita Vihar-Kalindi Kunj Road in Southeast Delhi since December 15.

Every night, 75-year-old Noornissa braves the freezing cold to help block one of the main roads into the national capital in a protest that is at the forefront of a rising challenge to the Modi government.

For nearly four weeks, Noornissa and about 200-odd women have been sitting and sleeping across the four-lane road. Men stand guard as the women, mainly from the Muslim area of Shaheen Bagh, sing the US Civil Rights anthem “We Shall Overcome” and chant against the CAA passed last month.

A replica of the India Gate has also come up near the protest site with names of people, who have lost their lives during the anti-CAA protests across the country, inked on it.

People have been protesting at Shaheen Bagh and nearby Jamia Millia Islamia to oppose the CAA and the NRC.

According to the amended law, members of Hindu, Sikh, Buddhist, Jain, Parsi, and Christian communities who have come from Pakistan, Bangladesh, and Afghanistan till December 31, 2014, and facing religious persecution there will not be treated as illegal immigrants but given Indian citizenship. The law excludes Muslims.