Delhi: Garbage piling up due to politics and red-tape

Despite a section of sanitation workers continuing strike, the civic body managed to get cleared 1,135 metric tonnes of garbage today. 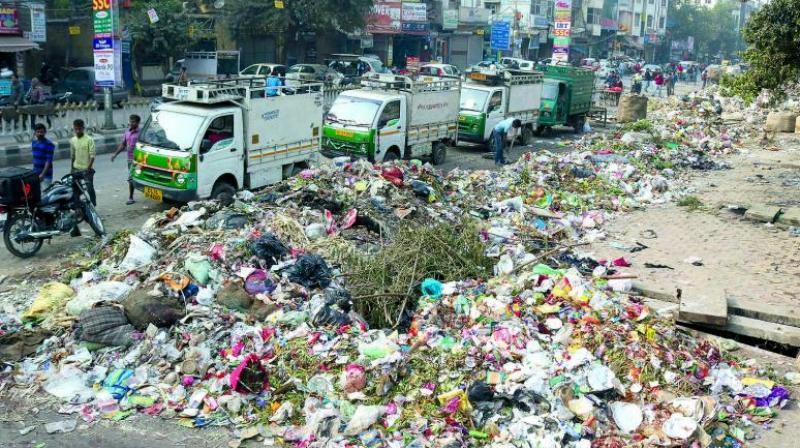 Heaps of garbage are seen dumped on an open road in East Delhi. (Photo: Biplab Banerjee)

New Delhi: Politics over garbage continued in the national capital as the ruling Aam Aadmi Party and the civic bodies continued the blame game and shirking responsibility, even as the strike called by a section of sanitation workers of East Delhi Municipal Corporation (EDMC) entered the eighth day on Thursday. While the Corporations blamed the Delhi government for not releasing its due share of money to them, the Aam Aadmi Party blamed the MCDs for their “inefficiency and criminal negligence” for the garbage pile-up in the city.

They demanded that the recommendations of the Fourth Finance Commission be implemented in the true sense. “The recommendation of the Fourth Finance Commission has already been submitted to the city government wherein it has been recommended that the corporations will be getting12.50 per cent out of global share and 100 per cent amount on the heads of education and entertainment tax,” they said. The Aam Aadmi Party’s Delhi convenor however said, “The BJP leadership repeatedly lies about MCD fund. If there was even an iota of truth in their claims then how is it that no merit was found in their arguments by any of the courts, where the BJP rushed with its fake arguments in its unsuccessful desperate attempts to corner the Delhi government. In fact, the courts are regularly pulling up the MCDs,” he said.

Despite a section of sanitation workers continuing strike, the civic body managed to get cleared 1,135 metric tonnes of garbage today.  As the sanitation workers continued their demonstration outside EDMC headquarters in Patparganj seeking a permanent solution to delays in payment of salaries and arrears, two protesters scaled the office building and threatened to jump off if their demands were not met. This created a flutter at the protest venue. The duo — Joginder Bahot and Premchand — were, however, persuaded by union leaders to come down.

While sanitation workers under the banner of MCD Swachhata Karmchari Union, affiliated to Bhartiya Mazdoor Sangh (BMS), have continued their strike, others have joined work after their two months’ salaries were paid by EDMC following a fund injection of Rs 119 crore from the Delhi government.

The North Delhi Municipal Corporation (NDMC) mayor Dr Sanjeev Naiyyar alleged that the state government has no blueprint for the welfare of the citizens.