National capital reeled under a severe cold wave as icy winds swept across the city with the mercury plummeting to 2°C. 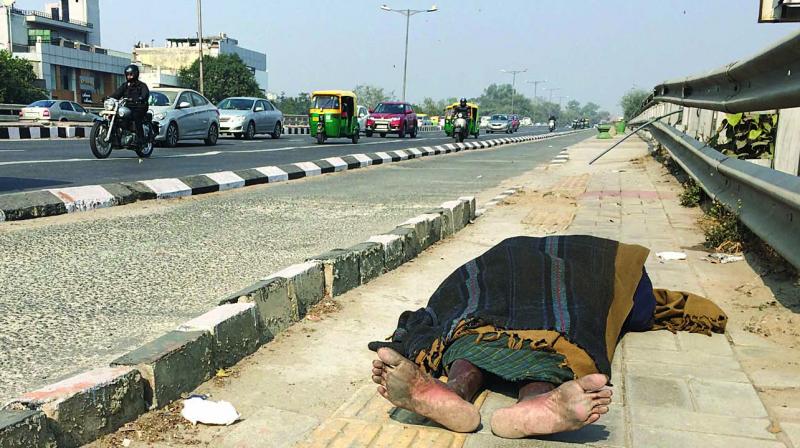 A homeless man lies dead on the Defence Colony flyover in New Delhi on Thursday. Temperatures have dipped and Delhi is freezing at 2°C. (Photo: Sondeep Shankar)

New Delhi: Coming as a respite from the unbearable winter chill, the Delhi government has directed the schools run by it to extend their winter break till January 19. The schools run by NDMC, MCD and Delhi Cantonment Board have been asked to make their own call.

While some private schools like Ahlcon International are extending their winter break, some of the others like DPS R.K. Puram, which have already re-opened, are suspending primary classes. On Thursday, the national capital reeled under a severe cold wave as icy winds swept across the city with the mercury plummeting to 2°C, recording the lowest in the month of January in the last three years and the coldest day of the season so far.

Earlier on Thursday, the Gautam Budh Nagar district magistrate, N.P. Singh, had ordered the closure of all schools from nursery to Class 12 till January 15.

The district inspector of school, Munesh Kumar, said that all schools affiliated to CBSE, ICSE or the UP Board in the district are included in the order. “All schools up to intermediate level will remain closed till January 15,” he said.

Sardar Patel Vidyalaya and Springdales School in Pusa Road are not making any alterations. “In view of the prevailing cold conditions and weather forecast by the meteorological department that the temperature in the capital will dip further in the coming days, it has been decided to extend the winter break for primary classes (Classes KG to 5) from January 16 to19 in all government and government aided schools,” a circular issued by the Directorate of Education (DoE) said.

“Private schools and education departments of NDMC, MCD and Delhi Cantonment Board can take requisite action in this regard, as per their own assessment,” the circular added. “The schools are directed to ensure that all the students come to school in full sleeves woollen clothes (long socks, stockings, shoes and gloves,” the circular said.

Last year as well, the Delhi government had directed the schools run by it to suspend primary classes in wake of the chilly weather and had asked the private schools to alter their timings.