Two women in the security-check tent also had black bands covering their mouths. 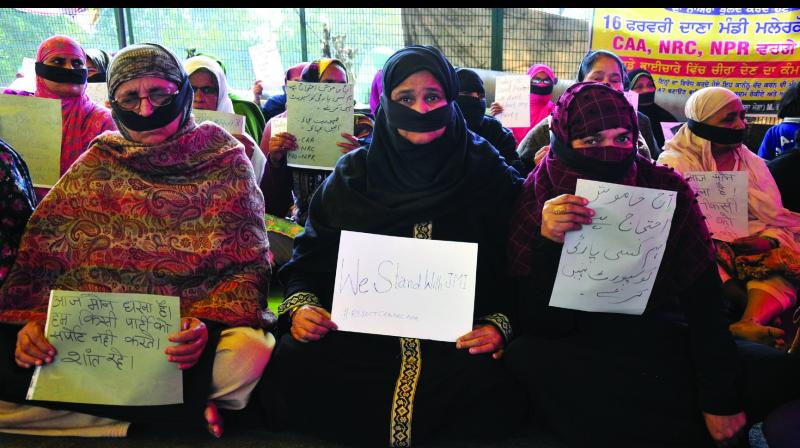 Muslim women sit in a protest against CAA/NRC at Shaheen Bagh in New Delhi on Tuesday. (Photo: Bunny Smith)

New Delhi: The anti-CAA Shaheen Bagh sit-in protest and the Bharatiya Janata Party have nothing in common except that for the last few weeks one has leaned heavily on the other to create some friction, polarisation in the hope that when Delhi went to vote on February 8, it would press a button on the EVMs with such anger and aggressive force that “its current would be felt in Shaheen Bagh”.

On Wednesday, as the results of Delhi elections started pouring in from 8 am, both felt the current and both reacted similarly.

Both went quiet. Except that the BJP was stunned into depressing silence, while Shaheen Bagh decided to register its roar by silence of the lambs.

Late on Tuesday night, Shaheen Bagh had put out a message that it would observe a silent protest on Wednesday. “Silent protest against police brutality and state oppression — 11th February, all day,” the poster read and asked all those taking part in the protest to bring a black tape or black cloth to cover their mouth.

After the incidents of shooting, a new security check cubicle has come up at the entrance to the tent where the women have now been sitting in protest for 59 days.

On Wednesday afternoon, outside the tent sat two men, both with a black band covering their mouths and on their chest was pinned a handwritten note that said, “Aaj maun dharna hai. Hum kisi party ko support nahin karte. Shaant rahein”.

Two women in the security-check tent also had black bands covering their mouths. They say nothing as they frisk and check bags except to gesture to women to be quiet.

The ladies inside the tent all have black bands covering their mouths and they hold up handwritten messages, in English, Urdu, Gurmukhi, Devnagri — “Today is silent protest. We don’t support any party.”

Taseer bhai, one of the men from the area who is part of the group that taks decisions on the Shaheen Bagh protest, says that this plan was thought up on Tuesday night to make sure the protest doesn’t turn into a “rajneeti akhara” (political battlefield).

Barely 400 meters away is the office of Amanatallah Khan, the sitting AAP MLA from Okhla who won on Wednesday by an impressive margin of 71,827 votes, defeating his nearest rival, the BJP’s Braham Singh.

His supporters were milling about, stringing together blue and white balloons in bunches of four while waiting for him to arrive.

I talk to Taseer bhai about the “goli-biryani ki rajneeti”, ask him why not let the protesting women comment on it since Shaheen Bagh was made a mudda in Delhi elections.

No, he says, because we “don’t want to make it a political platform. No one should misuse the protest… Aaj bhi maine suna ki someone from BJP was saying, Kejriwal ke samarthak hain, woh biryani bhijwata hai”.

So why not respond, I ask.

I walk back to tent once again, sit for a bit.

As I walk out after a while, the lady in the security-check cubicle has dropped her mouth band to her neck and is eating an ice cream cone. Chocolate.