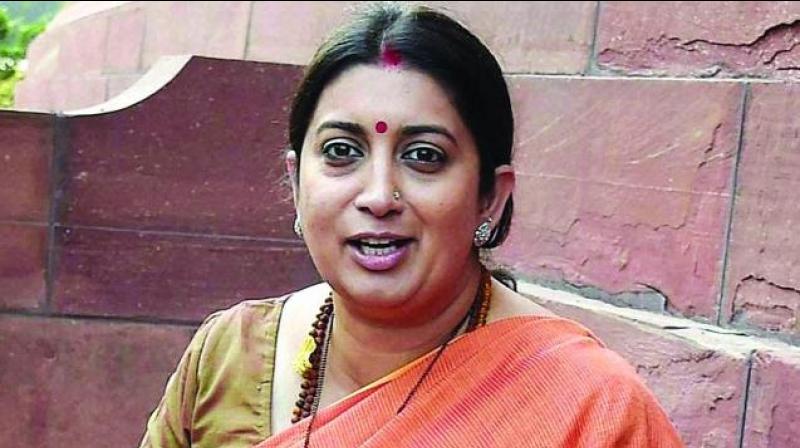 The Delhi Commission for Women (DCW) chief has been on an indefinite hunger strike to press her demand for death penalty for rapists within six months of conviction.

Carrying empty plates and flowers, the protesters, including UPSC and SSC aspirants and college students, demonstrated outside Irani’s Tughlak Crescent residence and raised Maliwal’s demand. They also demanded a meeting with Ms Irani.

It’s been eight days since Ms Maliwal began her hunger strike and Irani is ignoring her demands despite being a woman minister and an MP.

Ms Maliwal had on Monday written a letter to Ms Irani demanding that the government distribute the thousands of crores of rupees accumulated in the Nirbhaya fund among the state governments.

The DCW said that the students, who were protesting peacefully, were later detained and forcibly taken away by police. The police said 13 men and 14 women were detained.

Ms Maliwal has been sitting on a fast unto death at Samta Sthal, near Rajghat, since December 3. She has lost over five kilograms so far.

Members of several women organisations from different parts of Delhi met her on Tuesday and organised candlelight marches in her support at about 100 places in the national capital.

Women and men participated in these marches which culminated at the local police stations.

Mondal and Chhetri addressed the people at the venue and assured them that they will stand up for her demands in Parliament.

He said in the notice that the issues raised by the DCW chief need to be debated in both houses of Parliament.

Delhi minister Gopal Rai also met Ms Maliwal and said she is fighting for the women of the whole country. He said it is very unfortunate that the government is not listening her even after eight days.