Senior police officials said that it was the tattoos that led to the identification of the bodies. 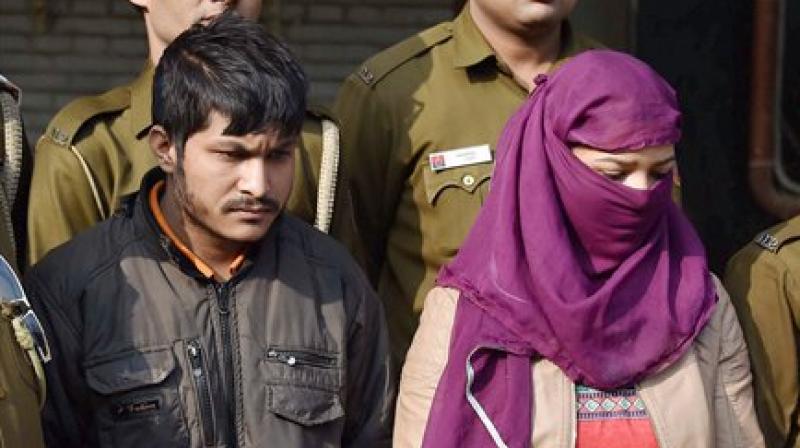 Two accused arrested by the Delhi Police in the Munirka twin blind murders case being produced before the court in New Delhi. (Photo: PTI)

New Delhi: With the arrest of two persons, including the husband of one of the victims, the Delhi police claimed to have cracked the cases of brutal murders of two female roommates in Munirka of South Delhi and rejected reports that a “serial killer” is on the prowl.

Senior police officials said that it was the tattoos that led to the identification of the bodies. They had questioned over 50 tattoo artists to get a clue in the case.

“The woman wrapped in plastic sheets had three ‘stars’ engraved on the wrist of her right hand and the headless body had a tattoo on the rear lower portion of the torso. This led to their identification,” said a police official.

On November 26, the second body was identified by the ex-boyfriend of the deceased.

“One of the women was identified as Sushma Rai, a resident of Assam. Her boyfriend told the investigators that her relatives were worried about her safety as she wasn’t reachable on her phone,” said an official.

Further investigation revealed that Sushma had been in contact with some people immediately before her death. “Her ex-boyfriend helped the police locate her rented accommodation. Meanwhile, investigation further revealed that Sushma was living with another girl who had gone missing for over 10 days. A woman was found who identified the deceased (whose body was found on November 18) as Nayesha, a native of Nepal,” said an official. The victims were freelance beauticians at a spa centre and were in touch with people who knew them from their native country. This group comprised of three people, Jeevan, Govind and Arjun.