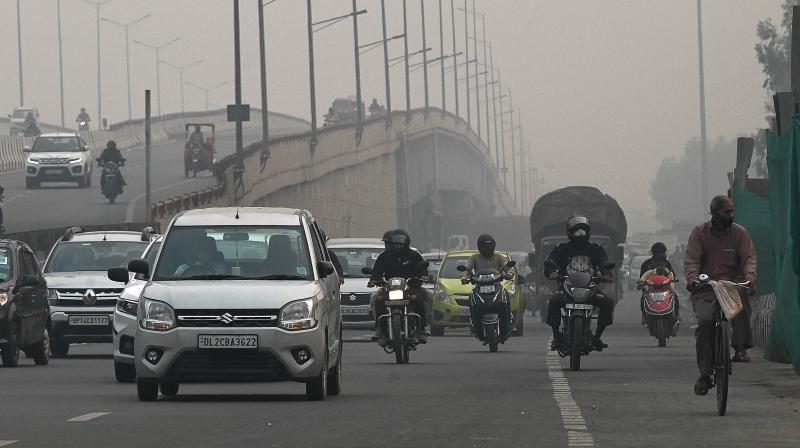 New Delhi: A layer of smog shrouded Delhi-NCR on Thursday and partially blotted out the sun on Chhath Puja as the air quality slipped back into the severe zone with unfavourable meteorological conditions aiding accumulation of pollutants, authorities said.

"This requires urgent emergency action on key combustion sources (vehicles, industry, waste burning) and dust sources (construction and roads) to prevent further trapping of pollution when there is no wind to blow this away," said Anumita Roychowdhury, executive director, research and advocacy, CSE.

At 10 am, Delhi recorded an Air Quality Index (AQI) of 407. Thirty-three of the 39 air quality monitoring stations in the national capital recorded air pollution levels in the severe category.

An official from the India Meteorological Department (IMD) said shallow fog and low temperatures in the morning -- Delhi recorded the season's lowest temperature of 12.6 degrees Celsius on Thursday -- trapped pollutants close to the ground and calm winds led to stagnant conditions.

Visibility levels at the Indira Gandhi International Airport and the Safdarjung Airport dropped to 600-800 metres, he added.

The CSE said the current severe smog episode in Delhi-NCR is expected to last for two more days.

It also said the average daily contribution of smoke from farm fires from the middle of October to November 8 was the lowest in four years.

"Compared to the first smog episode of the previous four years, the current smog has matched the duration of the first smog of 2018 and 2020 season -- both lasted six days. If conditions do not improve, it might overtake the 2019 smog that lasted eight days," the CSE said.

The longer duration of this year's smog despite relatively windier local conditions might be due to a lack of pollution control measures in the city, the green think tank said.

On an average, the contribution of smoke to Delhi's daily PM2.5 from the middle of October to November 8 was the lowest in the last four years.

The share of farm fires in Delhi's pollution rose to 48 per cent on Sunday, the highest since November 5, 2018, when it was recorded at 58 per cent.

Last year, the share of stubble burning in Delhi's pollution had peaked at 42 per cent on November 5. In 2019, crop residue burning accounted for 44 per cent of Delhi's PM2.5 pollution on November 1.