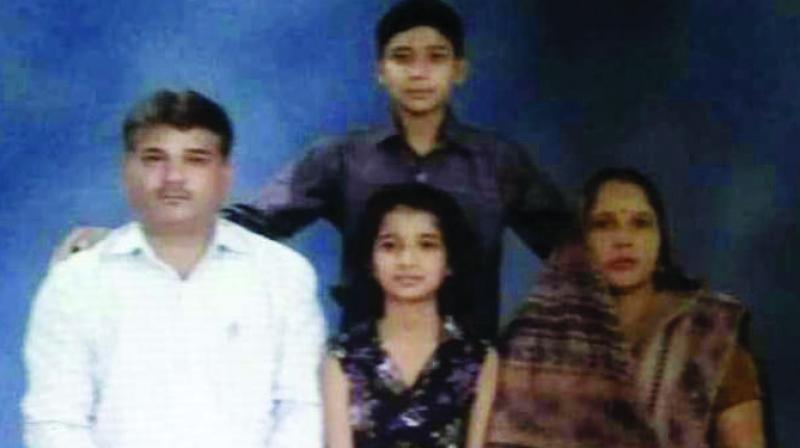 A file photograph of the Verma family.

New Delhi: The national capital was once again jolted by the triple murder of a family inside their residence in Vasant Kunj’s Kishangarh area in the early hours of Wednesday, following which the couple’s 19-year-old son was arrested

The three were stabbed to death. The victims, identified as Mithilesh Verma and Siya Verma, a couple in their 40s, and their minor daughter Neha (16), were reportedly found dead with stab wounds, while their 19-year-old son Suraj was found with minor injuries.

However, the police cracked the case within hours with the arrest of the couple’s son, Suraj, who hated his father, planned the entire incident and executed it. The accused brought a kitchen knife for Rs 200 from Mehrauli.

Senior police officers visited the spot, while Suraj was questioned inside his house following which he was whisked away by the police.

In 2013 the accused had allegedly staged his own kidnapping when he had gone to a nearby market.

The police interrogated Suraj as there were some discrepancies in his statement after which he confessed to the crime.

The accused used to hate his father as he was annoyed with his father’s continuous nagging.

After being informed about the incident, the police reached the house at 5.20 am and found the victims lying in pool of blood. The bodies of Neha and Siya were found in one room, while Mithlesh ‘s body was found in another room of the house.

According to the police, the deceased persons were stabbed multiple times with a kitchen knife and a scissor. The weapons used for commission of the crime have been recovered and their bodies have been sent to a hospital for post-mortem.

Mithilesh was a contractor in the locality and his wife used to work in a local NGO. Suraj was pursuing a course in BTech civil engineering from a private university in Gurgaon, while the daughter was in Class 9. The family was residing in the house for the last 18 years.

Early morning, Suraj was heard crying for help. Suraj had reportedly told the cops that the attackers had come and hit him on the head following which he lost consciousness and woke up to find his parents stabbed to death.

“I got a call from my family members in Kannauj at 5.30 am. Mithlesh’s neighbours had informed them. I rushed to check on them and found their bodies lying in a pool of blood with multiple stab injuries,” said a family member, adding it was a “cold-blooded murder”.

According to a senior police officer, the entire house was ransacked, but no valuables were found missing.