The notes mentioned about 'other souls accompanying spirit of Lalit's father' and 'how spirits are still yearning for salvation.' 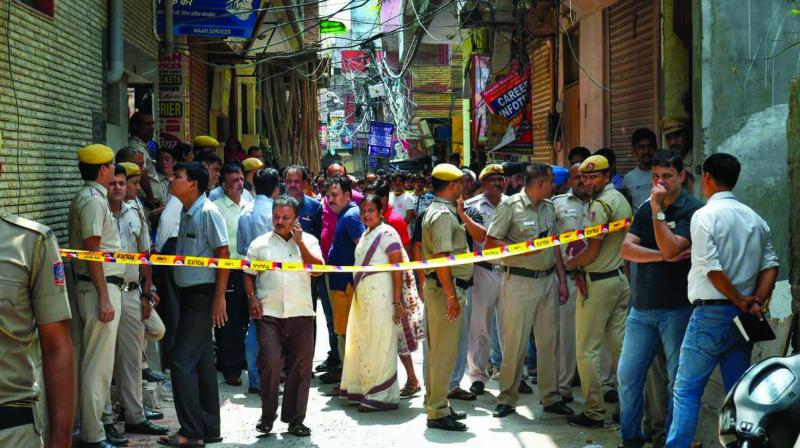 Police found 11 diaries which had 'psychological musings' and things about attaining 'road to God'.(Photo: PTI)

New Delhi: The registers recovered from the Chundawat family's residence in north Delhi's Burari has mentioned about "wandering souls," while apprehending that the family might not see the next Diwali, said a senior police official on Tuesday.

One of the dead members, Lalit Singh Chundwat, had visitations from his father's spirit during which he would act and talk like his father and dictate notes, the police official said.

In a November 11, 2017 entry in the register, Lalit had mentioned about "someone's mistakes" behind the family's failure to "attain something."

The notes also mentioned about "other souls accompanying the spirit of Lalit's father", who had died in 2007, and "how those spirits are still yearning for salvation."

"Four souls are still wandering with me. If you improve yourself, these souls will be freed. You feel that by completing all the rituals in Haridwar, the souls achieve salvation. I am accompanied by the souls of others also," said the note written in Hindi on July 19, 2015.

The notes quoted Lalit's late father soul as saying that the souls of various late relatives of the extended Chundawat's family - those of Sajjan Singh, Hira, Dayanand, Ganga Devi were accompanying him and longing for salvation. "

Sajjan Singh was the father Lalit's wife Tina, Hira was the husband of Lalit's sister Pratibha, and Dayanand and Ganga Devi were in laws of his sister Sujata Nagpal, who escaped the gory mass suicide.

The notes also mentioned about "doing good deeds" and talked of late "Dhruv's phone addiction and how it's not good", besides about "one of the women of the family getting into frequent quarrels with others."

The notes also mentioned about virtues of late Lalit and Tina and ask the other family members to be like them, said the officer.

The notes have warned about how the construction of the house was delayed and how Priyanka's 'manglik dosh' affected her marriage prospects as "someone did not follow what was written in the notes."

The entries also mentioned that the phenomenon of the spirit of Lalit's father visiting his son would not occur in presence of outsiders in the house.

"This explains why Lalit did not show such behaviour when there were guests in the house for Priyanka's engagement. During our questioning, we found that Lalit along with his wife exercised considerable control over the family," the officer said.

Ten of the 11 members of the ill-fated family were found hanging from an iron-mesh of the ceiling on July 1, while the body of 77-year-old family matriarch Narayan Devi was lying on the floor in another room of the house.

Her daughter Pratibha, 57, and her two sons Bhavnesh, 50, and Lalit, 45, were among the deceased.

The others who were found hanging were Lalit's wife Tina, 42, their 15-year-old son Dushyant and Pratibha's daughter Priyanka, who was engaged last month and was supposed to get married by the year end.

They had also found 11 diaries which had "psychological musings" and things about attaining "road to God".