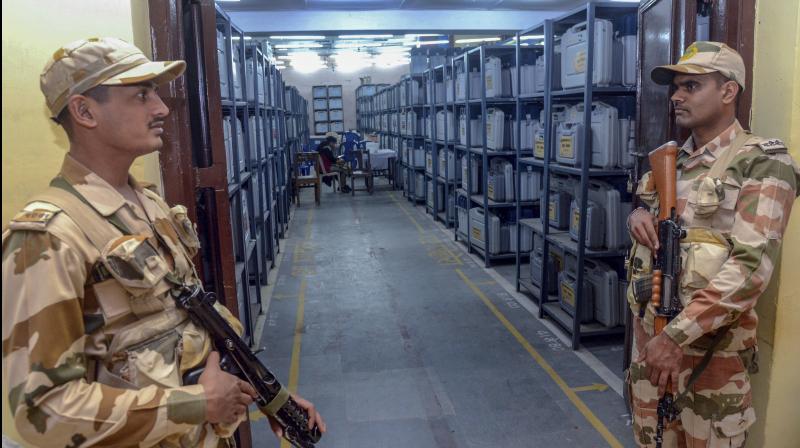 New Delhi: The high voltage poll campaigning on roads as well as on social media came to an end on Friday evening at 6.00 pm, 48 hours prior to the poll which is all set to be held on Sunday in the national capital. Further, loudspeakers used for political campaigning will also be turned off.

As many as 1,43,27,458 crore voters in Delhi will decide the fate of 164 candidates, who are in the fray. It is being speculated that there is a triangular fight between BJP, Congress, and AAP.

Out of the 2,700 locations in the national capital, 523 critical polling locations have been shortlisted by the Delhi police and ROs (returning officers).

Based on the detailed intelligence analysis of threat perceptions and the sheer volume of voters, who are going to exercise their franchise, the Delhi police has put in place an extensive security apparatus to ensure safety on the polling day.

The Delhi police will deploy over 60,000 police personnel, including 47 companies of Central Armed Police Forces (CAPFs) and 13,000 home guards to ensure smooth polling.

The Delhi Election Commission said that as many as 369 non-resident Indians (NRIs) will have the rights to exercise their franchise in the city on Sunday, but they have to bring their original passports. “The campaigning will stop on Friday as the 48-hour silence period will start from 6.00 pm and stay till 6.00 pm on Sunday,” said Ranbir Singh, the Delhi CEO (chief electoral officer).

“Special paramilitary forces will be deployed there besides webcasting and CCTV facilities. Micro-observers would also be there. We have made all arrangements for smooth polling,” he said. “No campaigning shall be allowed beyond the 6.00 pm limit, including on social media. All print ads need to be pre-certified for any publication in newspapers,” he added.

Recently, DCP Amulya Patnaik chaired a meeting of the senior police officers of the neighbouring states to ensure better coordination in the intelligence sharing and smooth movement of the poll-related material to the polling stations.

The quick reaction teams (QRTs) and special weapon and tactic (SWAT) teams will be deployed along with the mounted police. The local police has been instructed to keep a tab on the movement of ruffians, knifers, bad characters (BCs), and people with past record of poll related violence, a senior police official said.