Elaborating on the issue, he said in the US, the AI fight is led by private players like Google, Amazon, Facebook, Apple and others. 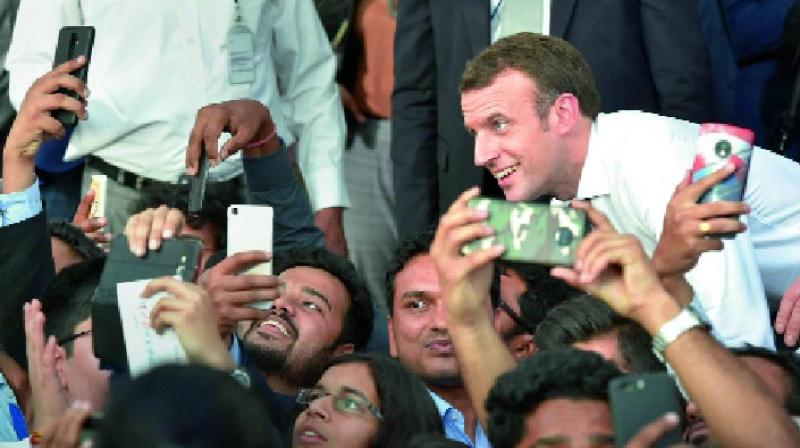 French President Emmanuel Macron takes a selfie with students (above) and interacts with them at Bikaner House in New Delhi. (Photo: PTI)

New Delhi :  French President Emmanuel Macron today emphasised on the need for more pacts on environment at the global level that could empower people in having a say in battling climate change. He also stressed on higher investments by the governments to deal with climate change.

Referring to the Paris framework agreement on climate change, Mr Macron said despite the US decision to leave the pact, many countries have decided to stick by it.

“We want to step up that (the fight against climate change) with new agreements at the UN by 2020, which will give new rights to people...People can go against a company or a government, saying you are not complying with your own commitment,” Mr Macron said. The French leader was speaking at an interaction with students at a town hall here. Responding to a question on the French government’s stand on artificial intelligence, Macron said it was necessary to invest heavily in the field to create an alternative as it currently dominated by the US and China. Elaborating on the issue, he said in the US, the AI fight is led by private players like Google, Amazon, Facebook, Apple and others.

“It is totally privately driven and privately held, which according to me is a big mistake because it deals with privacy...In a certain way with the choice of the society because it will impact your day-to-day life, your intimacy and so on. And these guys will decide for you,”  Mr Macron said. On the other hand, it is fully controlled by the state in China, he said.

“In China, it is 100 per cent state-driven, government-driven. You have the private leaders but all the data is controlled and monitored by the government, which is, for me not a society I decided to live in,” Mr Macron said.

“So, for Europe, it is necessary to create another model and research in this field is a critical element,” he said. This, he said, will not only create a single digital  market, but also help build its own regulations in the arena. In a nearly hour-long interaction, Mr Macron was asked questions ranging from lighter queries like handling mud-slinging in public life to a more serious ones related to climate change and security of women. Dressed in white shirt, black trouser with a black tie, Mr Macron obliged students seeking selfies with him.