Meanwhile, the deadlock between the safai karamcharis and the municipal corporations reached the green court on Tuesday. 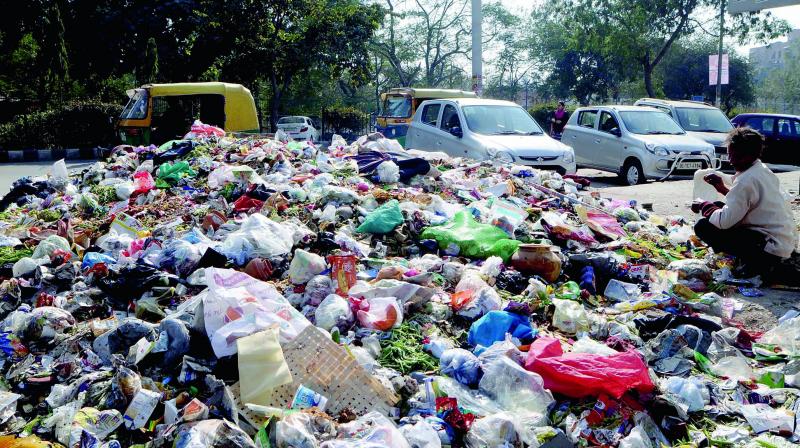 Garbage piles up outside the residence of an AAP MLA at Trilokpuri in East Delhi. (Photo: Asian Age)

New Delhi: A section of sanitation workers continued their strike on Tuesday, even as EDMC officials claimed that all unions ended the agitation and helped dispose off 2,000 metric ton garbage piled up due to week-long disruption in civic services.

The East Delhi Municipal Corporation (EDMC) officials claimed that after a meeting with the commissioner, all the unions ended the strike.

“They will resume their duties from evening itself. It has been decided that their demands, which can be fulfilled immediately, are agreed upon, and those which need consideration will be considered over a fixed period of time,” said a senior EDMC official.

National general secretary of Rashtriya Safai Mazdoor Congress affiliated to INTUC, Veer Singh Dhiman, said, “We have decided to call off the strike after the meeting with the commissioner and we will join duty tomorrow.” He said the EDMC officials agreed to fulfill their main demands related with payment of salaries and regularisation of daily-wage workers.

“They said that salaries will be paid timely and also promised to disburse the arrears in April. We were also apprised that process of regularisation of temporary workers will be started soon,” Dhiman said. However, the MCD Swachhata Karmchari Union, affiliated to Bhartiya Mazdoor Sangh (BMS), said it is still on strike.

“Today, we continued to be on strike and sanitation workers led by us piled up garbage in front of the camp office of AAP’s Trilokpuri MLA in protest against the Delhi government’s failure to provide adequate funds to EDMC,” said Sanjay Gehlot president of the Union.

He, however, acknowledged that a section of sanitation workers had decided to end the strike. He said his Union will weigh options after a meeting on Wednesday.

“I have heard that a section of sanitation workers have called off the strike. I don’t know what they are thinking. We will convene a meeting tomorrow and take a decision with regard to the strike,” Mr Ghelot added. The sanitation workers of EDMC, numbering around 17,000, had gone on strike on January 5 demanding payment of their salaries and arrears.

Meanwhile, the deadlock between the safai karamcharis and the municipal corporations reached the green court on Tuesday. The National Green Tribunal (NGT) has taken a strong view of the situation and has issued notices to the stakeholders, state government, workers’ union, and the Centre. The NGT has also formed a committee to tackle the menace of solid waste in Delhi. The green body noted that Delhi generates nearly 14,100 metric tonnes of municipal solid waste per day and said that the mass generators of waste cannot be equated to a simple household generating trash. The committee includes representatives of the NPCB, DPCC, DDA, MCD and D-G Health.
and four independent members, will visit the site and give report about the capacity and sewage management plant.

It will also look after the solid waste management of the five star hotels, hospitals, big colonies, and colleges that have more than 500 students.