According to the police, roads leading to the campus were shut for traffic and appeals were made to students to protest peacefully. 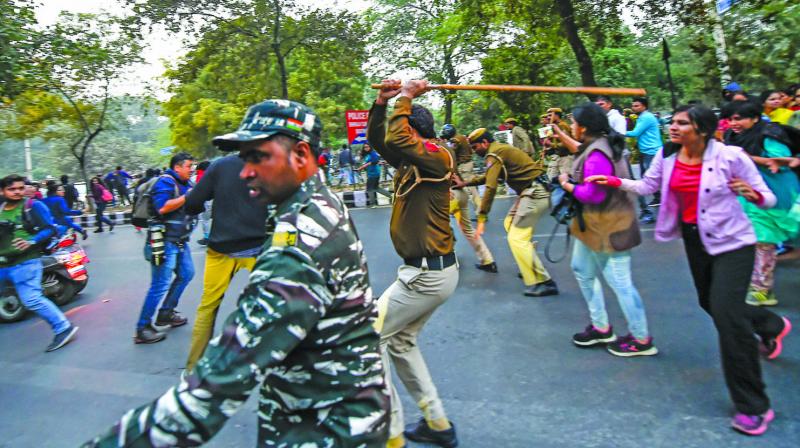 Police lathicharges JNU students during their march from the University campus to Rashtrapati Bhavan to ‘save public education’ in New Delhi, Monday. (Photo: PTI)

New Delhi: Jawaharlal Nehru University (JNU) students, on Monday, alleged that the Delhi police resorted to lathicharge on them near Bhikaji Cama Place Metro station while they were marching towards the Rashtrapati Bhawan as they sought an appointment with the President over the hostel fee hike issue. However, the Delhi police denied such claims.

According to the police, roads leading to the campus were shut for traffic and appeals were made to students to protest peacefully. However, students moved towards AIIMS which lead to traffic chaos in South Delhi.

According to JNU Students’ Union (JNUSU) president Aishe Ghosh, several students, including girls, have been detained by the police who brutally attacked the protesters asking them to go back to campus.

“The police had deployed five district police personnel and nine companies, including three women companies from the Central Reserve Police Force (CRPF), to handle the crowd. The police has not detained any students,” a senior police official said.

Following the protest, entry and exit at three Metro stations in Central Delhi, which were closed for over four hours following instructions from the Delhi police, are now open, according to officials at Delhi Metro Rail Corporation (DMRC).

The Udyog Bhavan, Lok Kalyan Marg, and Central Secretariat Metro stations were closed at 1.15 pm on Monday in view of multiple protests near the stations.

The students have also called for boycott of the upcoming semester exams despite repeated appeals by the administration asking them to return to classes.

The HRD ministry had set up a three-member committee to look into ways to restore normal functioning in Jawaharlal Nehru University and mediate between the agitating students and the administration. The panel submitted its report to the ministry but no call has been taken yet.

The students’ agitation over the hike in hostel fee escalated on November 11 when thousands of them clashed with the police outside the All India Council of Technical Education (AICTE) premises, where the university’s convocation was held.

The JNU’s executive council had announced a partial rollback of the hike for students belonging to the BPL category and not availing any scholarships. However, the protesters dubbed it “eyewash.”