On an average, Delhi sees 20 days of dense fog between mid-December and mid-February, according to the MeT department. 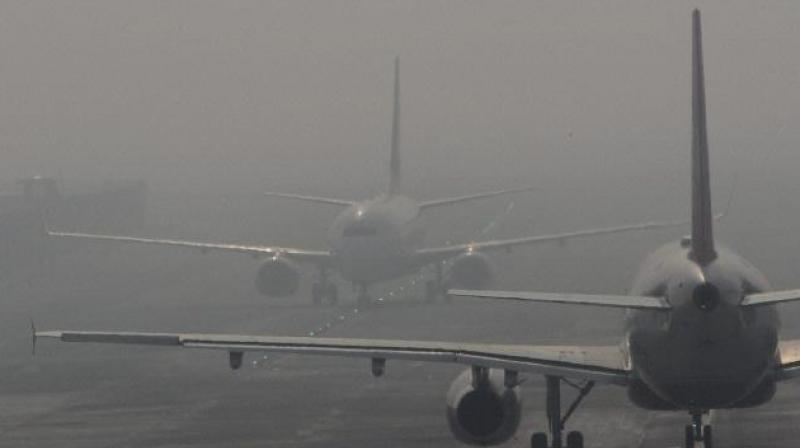 As per the DGCA guidelines, the airlines are being asked to put only CAT-III compliant crews on board so that the diversion of aircrafts can be curbed during foggy days. (Photo: PTI)

New Delhi: With an early onslaught of fog in Delhi, Indian Metrological Department (IMD) and Air Traffic Control (ATC) said they are looking at ways to manage flight diversions better. While the ATC is testing its advanced air traffic flow management system, the IMD has installed more RVR (Runway Visual Range) devices to give real-time information at five neighbouring airports of Delhi. The device helps pilots to safely land in fog. Close to 23 major airports where Delhi-bound flight could be diverted in times of exigencies themselves experience thick fog in winters. When fog intensifies, interval between arrivals and departures increases and the runway occupancy time
increases, leading to diversion of Delhi-bound flights to airports in Jaipur, Lucknow and Amritsar.

In order to reduce airborne holdings and fuel burn during times of dense fog alert, the ATC segregates the aircrafts in the air so that those equipped to land in low visibility can be put closer to the runway, Mr Bhardwaj said. As per the DGCA guidelines, the airlines are being asked to put only CAT-III compliant crews on board so that the diversion of aircrafts can be curbed during foggy days.

Runways 28, 29 & 11 at IGI Airport are certified for CAT III B operations, which allow compliant aircraft and trained pilots to land even when the runway visibility is down to 50 meters.

“We give refresher training to all the controllers at the IGI airport. Last month, we concluded the training for 350 controllers,” Mr Bhardwaj said on the Delhi airport’s preparedness for fog.  Fourteen new RVR devices have been installed this year, including 5 at Delhi airport, 1 at Varanasi airport and 3 each at Jaipur and Lucknow airport to facilitate landing in low visibility period.

On an average, Delhi sees 20 days of dense fog between mid-December and mid-February, according to the MeT department. But this year, the national capital may receive more foggy days due to high pollution levels and adverse wind patterns. Much ahead of the expected fog period, the airport authorities battled dense fog on November 30 and December 1.