Delhi police is currently combing through CCTV footages to identify and track down the men who shot Umesh and later fled from the spot. 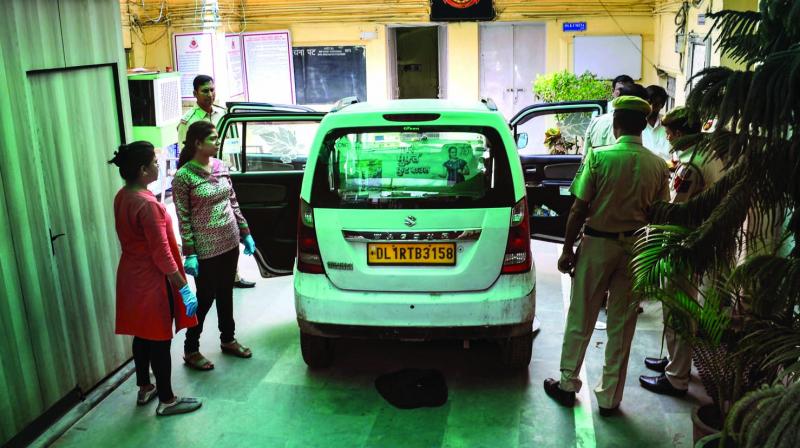 Policemen inspect the car of the taxi driver who was shot dead by unidentified men at Kotla Mubarakpur in New Delhi on Sunday. (Photo: PTI )

New Delhi: In a shocking case of road rage in the national capital, a 40-year-old cab driver was shot dead by unidentified men in South Delhi’s Kotla Mubarakp-ur, police said on Sunday.

The victim, Umesh, is a resident of Sangam Vihar. He was found dead in Kotla Mubarakpur area of South Delhi on the intervening night of Saturday and Sunday.

Police officials said that the deceased had parked his car nearby and was talking to a friend. About four men arrived at the spot in a Honda City car where he was standing and engaged in an argument with the driver. Following this, one of them shot him to death.

According to media reports, the argument between them may have ensued after Umesh’s car accidentally brushed past theirs. This led to the argument, during which the accused pulled the trigger.

A passerby rushed the driver to a hospital, whe-re he was declared dead upon arrival. Conside-ring that the murder took place in an upscale locality in the national capital, the incident has sparked fear among locals.

Delhi police is currently combing through CCTV footages to identify and track down the men who shot Umesh and later fled from the spot.

Instances of deadly violence over road related fights are not uncommon in the national capital, where residents are even murdered over disputes concerning parking spa-ce. Earlier this year, an insurance agent was stabbed to death by his neighbour over a parking dispute in West Delhi.