Procession at Hauz Qazi to reinstate idols at temple

The temple authorities performed a puja followed by a hawan at the premises. The procession was led by religious gurus from different temples. 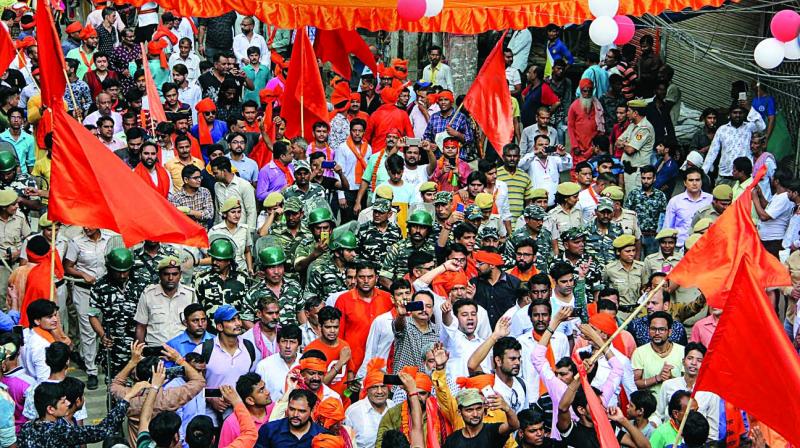 NEW DELHI: A religious procession was held on Tuesday amid heavy security to reinstate idols at a temple which was vandalised by members of a particular community in Hauz Qazi’s Lal Kuan area. Thousands of people from the locality participated in the procession including the religious leaders and Delhi BJP MPs. The temple authorities performed a puja followed by a hawan at the premises. The procession was led by religious gurus from different temples.

At around 10 am, the priest of the Durga Mandir in Lal Kuan performed rituals after purifying the temple, following which a procession was started from 11 am. BJP Members of Parliament Vijay Goel, Manoj Tiwari and Hans Raj Hans also participated in the function. Meanwhile, Mr Hans’ mobile phone was stolen while he was taking part in the procession.

“The new idols have been placed after the purification of the temple at around 10 am,” said Anil Kumar Pandey, priest of the temple.

The Durga Mandir Committee has borne the expenses and has not taken any help from any outsider. After the purification, a procession was started at around 11 am in which people from different parts of the city participated. A public feast was also organised.

Members of the Aman Committee distributed food to people participating in the procession. Muslims were seen distributing water and food in the public feast which was organised by the Durga Mandir Street Committee.

People were wearing the saffron all over the street of Lal Kuan and chanting slogans of ‘Jai Shree Ram’. Shamin Ahmad (65), a retired person and member of Aman Committee, said: “We condemned the incident which had happened on June 30. People from outside Lal Kuan came here and tried to create communal tension in the area”.