Mr Gambhir said he would resign even after winning the polls after May 23 results if the charges are proved. 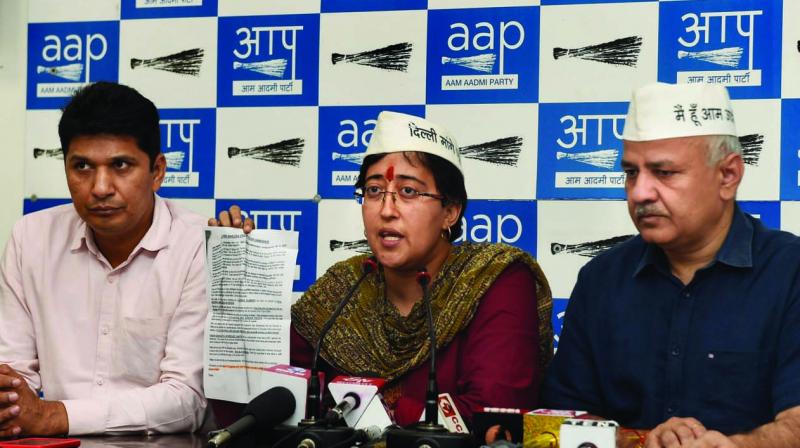 New Delhi: Ongoing acrimony and low-level rhetoric in this election campaign touched its nadir when pamphlets with casteist slurs which called AAP’s East Delhi candidate Atishi a “prostitute” were distributed in the constituency on Thursday.

Addressing a press conference at the AAP headquarters, an emotional Ms Atishi fought back tears as she spoke about how smear campaign pamphlets that sought to equate her with a “prostitute” were being circulated in her constituency. AAP accused BJP candidate Gautam Gambhir of distributing the pamphlets.

BJP denied the charge. The Delhi Commission for Women, however, issued a notice to the Delhi police asking whether they have filed an FIR for circulation of these pamphlets.

AAP leaders read out from the pamphlets which described Delhi chief minister Arvind Kejriwal “a dog” and his deputy Manish Sisodia a “scheduled caste” born of “unlawful parents”.

In a series of tweets, Mr Kejriwal expressed his support to Ms Atishi. Slamming Mr Gambhir, he said he never imagined the former cricketer could “stoop so low”.

Mr Gambhir, however, denied the allegations.  He dared Ms Atishi and Mr Kejriwal to prove their charge.

“I declare that if it’s proven that I did it, I will withdraw my candidature right now. If not, will u quit politics?” he tweeted.

Mr Gambhir said he would resign even after winning the polls after May 23 results if the charges are proved.

Hitting back at Mr Kejriwal, Mr Gambhir said: “I abhor your act of outraging a woman’s modesty @Arvind Kejriwal and that too your own colleague. And all this for winning elections? U r filth Mr CM and someone needs ur very own jhadu (broom) to clean ur dirty mind,” Mr Gambhir tweeted.

In a statement, the political greenhorn said there were five women in his family and he would not resort to such “petty” politics. “I will not let the AAP leaders go scotfree. I will file defamation suit against them,” he said.

Deputy chief minister Manish Sisodia, who was present at the press conference, accused Mr Gambhir of circulating pamphlets in an attempt to defame the AAP candidate. "Language in the pamphlet is so abusive and low that everybody will be ashamed while reading it," Mr Sisodia said.

Ms Atishi and Mr Sisodia alleged that on Mr Gambhir's directions pamphlets carrying derogatory insults against them were being circulated in Krishna Nagar, Vishwas Nagar and other areas of the constituency. At the press conference, Mr Sisodia showed copies of the pamphlets. They, however, didn't bear anyone's signature.