BJP attacks party over presence of Tytler, Kumar at Rajghat. 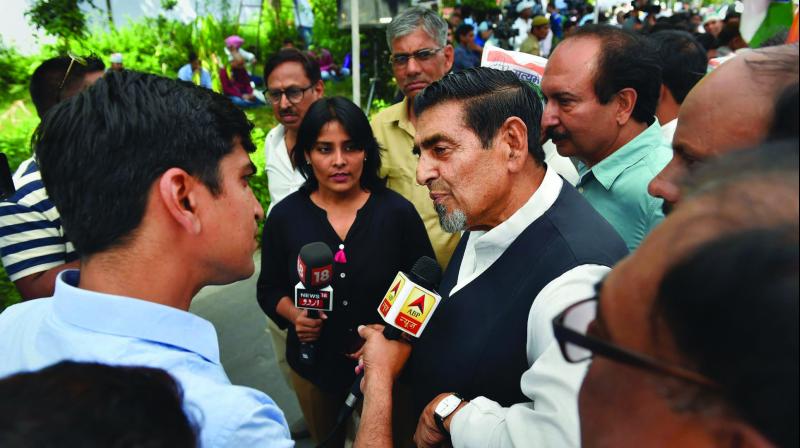 New Delhi: The 1984 anti-Sikh riots cast its shadow over the Delhi Congress’ day-long fast against caste violence and communalism with Sajjan Kumar and Jagdish Tytler, listed as accused for their alleged role in the riots, reached the venue of “fast for harmony” being led by Congress president Rahul Gandhi around 11.30 am and Mr Tytler went to the stage where other Congress leaders were sitting.

Soon Mr Maken was seen talking to Mr Tytler, who then sat on the floor in front of stage and left the venue soon after. Both the leaders were reportedly asked to leave the place.

Mr Kumar sat with party workers while Mr Tytler went to the stage where other Congress leaders were sitting. Sources said that both the leaders were asked to leave as their presence was not in favour of the party.

While a Congress leader said that Mr Tytler and Mr Kumar were asked not to sit on the stage, the party’s chief spokesperson Randeep Surjewala said the BJP was seeking to create a controversy where none existed.

Mr Kumar left the venue after being asked to stay away. When questioned about his reason for leaving the stage, Mr Tytler clarified that nobody had asked him to leave the stage.

“I was on the stage at 10.30 am. No one was present there except for former DPCC (Delhi Pradesh Congress Committee) president Subhash Chopra and one worker from the Seva Dal. I was informed by Mr Maken that Congress president Rahul Gandhi would be arriving at 1 pm. So, I came down to meet the party workers. From then on I sat with them,” said Mr Tytler.

Reacting to Mr Kumar and Mr Tytler’s presence at Congress’ fast, Union minister Harsimrat Kaur Badal tweeted, “What we are seeing in Rajghat is no fast, it is only a FARCE! Jagdish Tytler and Sajjan Kumar, who butchered thousands of Sikhs in 1984, attending a farcical “fast” for unity and harmony! What a joke!”

The BJP also questioned the presence of Mr Kumar and Mr Tytler at the protest venue. BJP spokesperson Dr Sambit Patra said that the Congress leaders’ decision to keep them away from the dais was an admission of guilt. He ridiculed the Congress’ nation-wide fast, saying its leaders had come to Mahatma Gandhi’s memorial to talk about non-violence but Mr Kumar and Mr Tytler’s presence exposed the party’s “real violent” face.

“Congress has fallen into its own trap. What we have seen today is not a fast, but the farce of a fast. (It was) an attempt by Rahul Gandhi’s party to fast track his politics to burnish his credentials, despite people rejecting him time and again,” said Dr Patra.