The exhibition highlights the traveller’s linkages with the country. 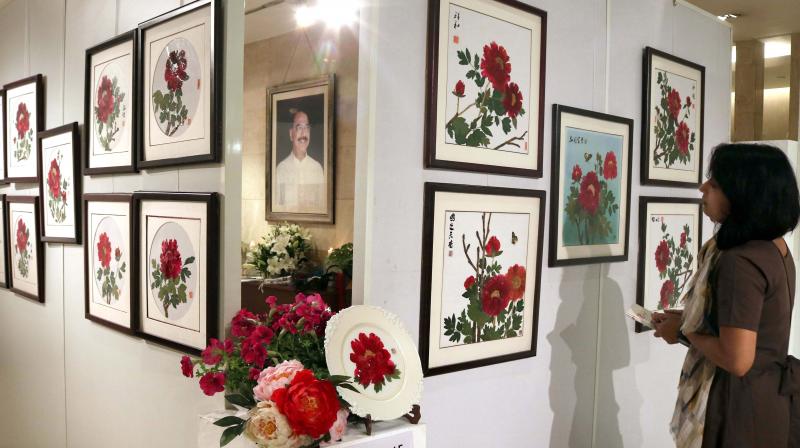 A visitor at the exhibition in New Delhi. (Photo: Asian Age)

New Delhi: A group of Chinese artists and photographers to trace and celebrate the journey of Buddhist pilgrim and scholar Huan Tsang (also known as Xuan Zang). An exhibition in the city highlights the traveller’s linkages with the country. Dried peony flowers on canvases, breathtaking pictures of the Indian-style Buddist temples in Luoyang and wonders of the natural world were part of the show that breathed life to Tsang, whose writings about his travel in India establishes the centuries old Sino-Indian ties.

“The White Horse Temple introduced Buddhism in Central China,” Zhang Xiaoning, who is a broadcast journalist in the city of Yanshi, said pointing to a picture of the Buddha statue.

Peony flower art, which involves intricate detailings with dried petals, was the showpiece of the three-day exhibition that started on Thursday. “It is ‘true flower art’. In Chinese folklore, peony is considered as the most beautiful of all flowers,” Mr Xiaoning said.

He said the participating artists work for various media state-owned media outlets in the Henan province of China.

The exhibition has fascinating images of Laojum Mountain, Longtan Valley, Oasis on the Luo river Chan, monasteries and Buddhist monks practising their martial art. Pictures of the former prime minister Atal Bihari Vajpayee and the former president Pratibha Patil, who during their term visited the Luoyang city, is also part of the art installation.

“These spectacular Buddist carvings and exquisite statutes graphically illustrate the millennial cultural and spiritual links between India and China,” Mr Vajpayee had said in a note he had left behind during his visit in June 2003.

Tsang came to India through Kashmir after visiting Central Asia, Iran and Afghanistan. His writings provide a detailed description of the of the connect between the two of the oldest civilisations.