Efforts being made to rig EVMs: AAP 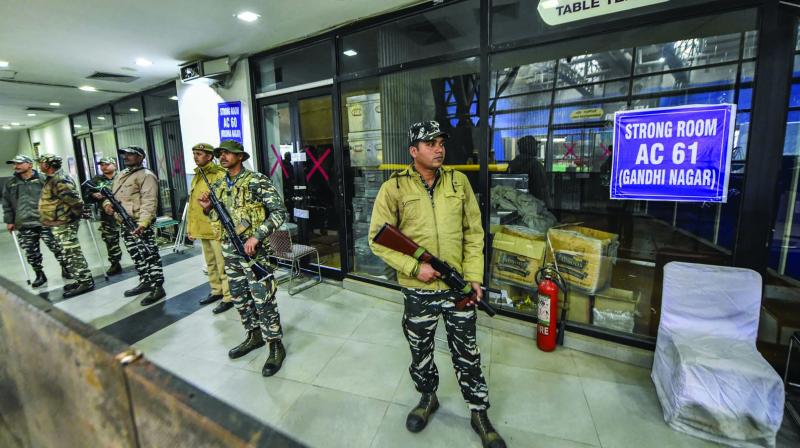 Security personnel stand guard outside the strongroom of a counting centre in Akshardham in New Delhi on Sunday. (Photo: PTI)

New Delhi: Even as multi-layer security arrangements and 24x7 CCTV surveillance have been put in place at counting centres to guard the Electronic Voting Machines, Delhi’s ruling Aam Aadmi Party on Sunday cited videos to back their claim that efforts were being made to tamper with the machines for the Assembly poll results. Senior party leader and Rajya Sabha MP Sanjay Singh tweeted a couple of videos, saying they were of voting machines being taken away illegally.

Refuting to such claims, a senior poll official said tampering the EVMs is impossible. Once the elections are over, the EVMs are sealed and kept in a tight security area. They are only opened on the day of counting.

A senior Delhi Police official said that around 10,000 police personnel including 50 platoons of paramilitary forces are deployed in a three-layer security apparatus to tackle any untoward incident.

The poll official further asserted that the transport and storage of the EVMs are well secured, dismissing the doubts raised by the political parties over movement and alleged tampering of the machines. Earlier a video clip has gone viral, purportedly showing “unauthorised” transportation of the EVMs.

“The entire process of polling and subsequent storage of EVMs in strong-rooms is fool-proof. The EVMs are transported back to the reception centres under proper escort by a contingent of central paramilitary forces and state police,” the poll official said.

The complete set of Control Units (CU), Ballot Units (BU) and Voter Verified Paper Audit Trail (VVPAT) of a particular polling station are supposed to be kept in the same strong room. The room is sealed under double lock in the presence of the candidates or their agents and the observer. Even 24X7 CCTV monitoring is done inside the strong room.

The unused VVPATs and unused EVMs are stored in a separate strong room. Even video and digital photography with date and time recording is done during transport and storage of EVMs.

Police said there are 21 centers except in three districts including the Central district. The district police along with the paramilitary keep a strict vigil. The special branch of police, which is an intelligence wing, gives timely inputs to the ground officials.

Every nook and corner of the EVM strong-room is kept under 24X7 CCTV vigilance and guarded by Central Armed Police Forces personnel. Further, a display of this CCTV feed is provided to representatives of the political parties at a place earmarked for them to camp, police added.

Earlier, the Aam Aadmi Party (AAP) urged the Election Commission to make arrangements outside the strong room so the party workers can make sure that EVMs in which the votes of Delhi Assembly elections are locked in are not tampered with.