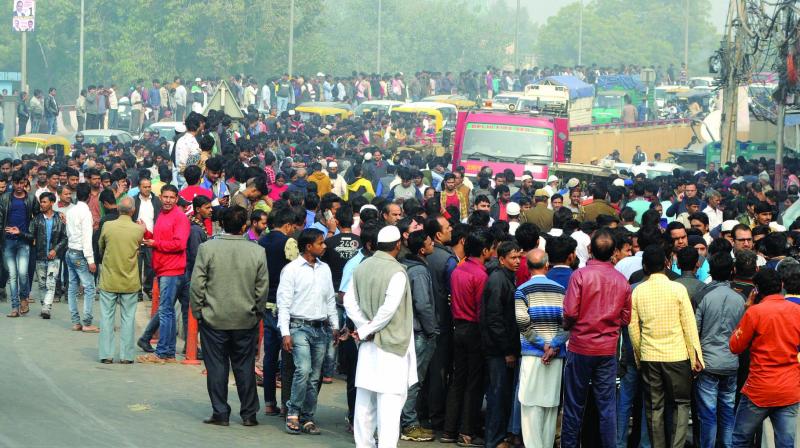 The tragic death of 43 people in Filmistan at Anaaj Mandi on Sunday due to short circuit has exposed the insufficiency of the civic agencies who don’t learn lessons from past tragedies as they wait for another to happen and then time tested game of “passing the buck” begins. (Photo: PTI, BIPLAB BANERJEE, PRITAM BANDYOPADHYAY)

NEW DELHI: Multi-storeyed buildings, especially in Central and North Delhi area with inadequate fire safety measures, narrow lanes, congested, overcrowded buildings, old buildings with poor internal wiring is a ticking time bomb for the people as many illegal factories in the area are running under the nose of civic authorities.

The workers have no choice but to work at this illegal factories as in perilous buildings for livelihood.

The tragic death of 43 people in Filmistan at Anaaj Mandi on Sunday due to short circuit has exposed the insufficiency of the civic agencies who don’t learn lessons from past tragedies as they wait for another to happen and then time tested game of “passing the buck” begins.

And this is not one-off incident as many areas where illegal factories are operating in residential areas are ticking bombs.

Rakesh Kumar Yadav, president, Federation of Sadar Bazar Trade Associations said that there are over 40,000 shops and over 1000 factories running in the area.

“It is a business hub since the mughal era. The open wires which lead to meter loads and narrow alley makes this area a ticking time bomb. The agencies should come up form a board including MP, MLA and other representatives to tackle such incidents in near future.  Further the civic agrnices are responsible for such incidents due to their negligence,” said Yadav.

“These lives could have been saved had the North Delhi Municipal Corporation (NDMC) and other authorities would have acted on several complaints lodged with them,” said sources.

NDMC and other agencies officials were quick to put the onus on the owners of the building and claimed that commercial activity was going on “illegally” in the three-storey building in Anaaj Mandi residential complex.

Zuber, a labourer in the area, said he had been working in a rexine factory for last five years. “I work and earn `4,000 per month. This incident is shocking for us and I agree there is no provision for us to escape if there is some tragedy or a fire incident but for living we have work,” he said.

Venting his anger over promises by local leaders for developing facilities and better working conditions for them, Rajendra, who works in a factory situated at a narrow and congested lane of the area, said leaders talk about development but the ground reality is just the opposite.

“We have a family to run. Children to teach and a house rent to pay so why would I not work, knowing that there is risk to my life. Leaders come and shed tears, announce compensations but nothing happens on the ground. So what if seven lives were lost, people will forget it after sometime and things will be back to square one,” Rajendra said.