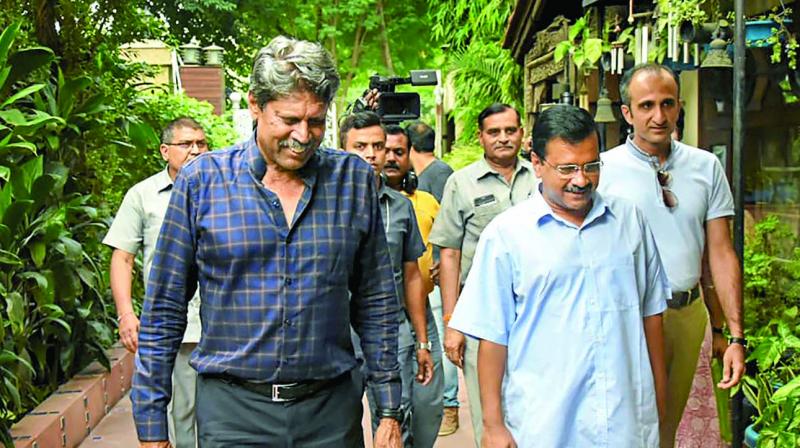 At a press conference here on Sunday, the Delhi chief minister thanked all those who took part in the campaign, and said: “L-G Anil Baijal today also checked for any water stagnation at his residence.”

“Our campaign against dengue is getting a lot of support and many celebrities are also participating in it. I am very happy that many people are taking part in it besides celebrities and journalists,” Mr Kejriwal told reporters.

He said that the participation of these public personalities will inspire common people to take precautions in combating this vector-borne disease.

On September 1, Mr Kejriwal had launched the campaign ‘#10Hafte-10Baje10Minute’ by inspecting his house for clean standing water. Dengue mosquito larvae breed in clean and stagnant water, and they thrive in this season.

Mr Baijal also shared pictures on Twitter after the inspection and tweeted: “Carried out inspection at residence to check for any potential sources of stagnant clean water, which can lead to breeding of Aedes mosquitoes that causes vector-borne diseases like dengue, chikungunya, etc. Such checks to be done at frequent intervals.”

In a fresh video message, the chief minister appealed to Delhi residents to give 10 minutes every Sunday — between September 1 and November 15 — to ensure that there is no stagnant water in their houses or surroundings.

In the morning, the chief minister had also tagged a few celebrities to join the campaign. “I challenge @therealkapildev ji, @ShatruganSinha ji, @sardesairajdeep ji, and @taapsee ji to participate in the #10Hafte10Baje10Minute campaign and inspect their homes. I urge all of you to challenge people you care about. Just 10 minutes can protect us from danger!” he tweeted.

Kapil Dev responded with a tweet in support of the drive, saying, “A good initiative taken by the honourable CM of Delhi. I request the Delhi residents to take all necessary precautions... suggested!!”

“More power to @Arvindkejriwal for making Delhi Dengue-Free! We all can do our bit by checking our homes every Sunday and ensure there’s no stagnant water stored anywhere. If there is, simply spill it out, pour oil on it, or replace it. #10Hafte10Baje10Minute,” Hashmi tweeted.