Gandhi, accompanied by his mother during the conference, said that his family has always valued education and celebrated excellence. 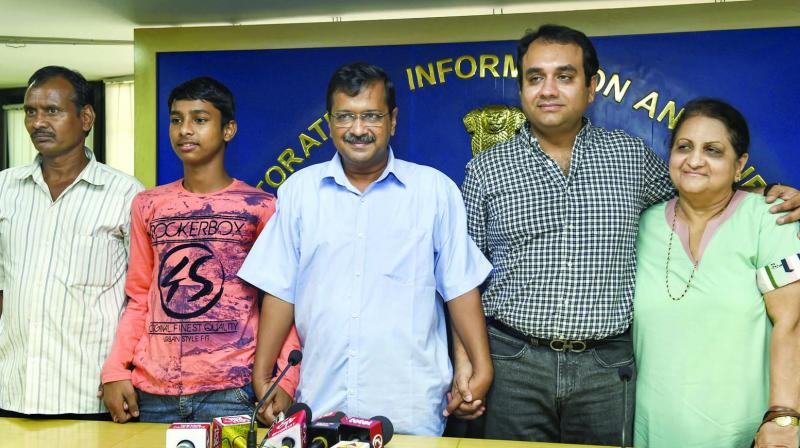 CM Arvind Kejriwal with Vijay Kumar who cracked the IIT entrance examination at a press conference in New Delhi on Sunday. (Photo: PTI)

New Delhi: A city-based family has decided to bear the cost of education of Vijay Kumar, who has qualified for the IIT-Delhi after availing the government’s free coaching scheme, said Delhi chief minister Arvind Kejriwal on Sunday at a press conference.

Mr Kejriwal introduced the South Delhi based family, during which Mr Kumar and his parents were also present. Kumar’s (16) father is a tailor while his mother is a homemaker.

“You all have already read about and seen on TV Vijay’s achievements. He had availed the Delhi government’s ‘Jai Bhim Mukhyamantri Pratibha Vikas Yojana,’ which is a free coaching scheme for aspiring students like him who dream big but do not have resources,” said Mr Kejriwal, himself an IIT graduate.

“After hearing about Vijay’s case, Varun Gandhi and his family decided to fund his education at IIT-Delhi. Their gesture will inspire others to contribute to society too,” he said.

Mr Gandhi, accompanied by his mother during the conference, said that his family has always valued education and celebrated excellence.

“Instead of donating money to a temple, making a talented kid realise his dream of IIT is a much bigger service to God,” he said.

Buoyed by the success of its ‘Jai Bhim Mukhyamantri Pratibha Vikas Yojana,’ the AAP government had earlier decided to extend it to needy students from general category and other backward classes.

Thirty-five underprivileged students, who got free coaching under the scheme, had cracked the JEE Main and NEET examination this year. Five of them secured admissions to leading technical and medical institutions such as Lady Hardinge College, IIT-Delhi, Netaji Subhas Institute of Technology, National Institute of Technology Delhi, and Banaras Hindu University (BHU).