Vijay Kumar, the deputy commissioner of police (West), said that the post-mortem has not been carried out due to non-availability of any relatives. 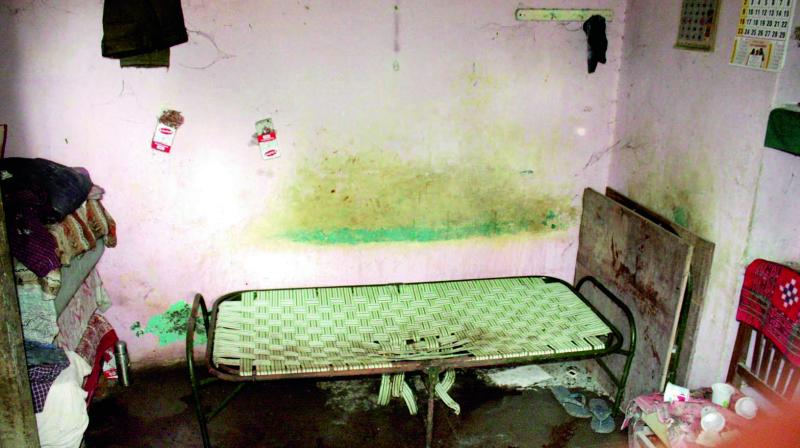 The room where the body of a retired scientist was found at Pusa campus on Thursday. (Photo: PTI)

New Delhi: A semi-decomposed body of a nuclear scientist was found on Friday in a Pusa Institute quarter with his “mentally disturbed” siblings “oblivious” of the death despite the foul smell.

Vijay Kumar, the deputy commissioner of police (West), said that the post-mortem has not been carried out due to non-availability of any relatives. He said that they will wait for one of his relatives to come forward in the next 72 hours.

On Thursday, the police was informed by Sonu Kumar, the field officer of the Pusa Institute, of a foul smell emanating from one of the quarters in the campus.

Mr Kumar told the police that as he traced the source of the foul smell to be the quarter of retired scientist Yashvir Sood, he attempted to enter the house. However, Sood’s sister did not let him in. He then informed the police, who arrived at the spot. They forcibly entered Sood’s house and found the scientist’s decomposing body lying on a bed.

Mr Kumar, who has been posted in the locality for the last six years, said that a security guard posted at a neighbouring quarter called him and informed him about the foul smell coming from the quarters in which the Soods were living. “When I tried to talk to his sister, she turned me away. Then I informed the police. I took the police team and some neighbours to their house,” Mr Kumar said.

Some women constables pacified Sood’s sister as she protested the entry of the police inside the house. After the team entered the house, it discovered Sood’s maggot-infested body.

It is suspected that Sood died of malnutrition around three-four days ago. His two younger siblings, Harish and Kamla, both said to be mentally disturbed, did not inform anyone of his demise, the officer said.

Sood had retired as a principal scientist from Pusa Institute’s nuclear science department on March 31 at the age of 62. He was living with his two younger siblings, both in their 60s, at an abandoned government quarter. The police could not trace any other family member.

“I have been here for almost six years now. When he was in service, I used to see him outside. Sometimes he also spoke to me. But after his retirement, one would rarely see him outside,” recalled Mr Kumar.

The trio mostly kept to themselves and did not interact with the neighbours. They had been living there for a long time and were unmarried. Locals, however, claimed that Kamla was married. However, she had left her husband and had been living with her brothers.

The neighbours had noticed the foul smell earlier, but did not raise any alarm. It was only yesterday, when the stench became unbearable, that one of the neighbours alerted their guard, who in turn informed Mr Kumar.

Sood’s siblings have been admitted to the Institute of Human Behaviour and Allied Sciences (IHBAS) by the police. The deceased had not withdrawn a single penny, either from his pension or gratuity funds. Similar incidents have been reported in the past where people were found living with the bodies of their relatives.

In July, a 70-year-old mentally challenged man was found living, for almost a week, with the body of his younger brother in Northeast Delhi’s Karawal Nagar. The incident was reported to the police after neighbours noticed foul smell emanating from the house where the duo stayed.

In another incident last year, a 90-year-old man was found living with the body of his wife in their one-room flat in Southeast Delhi’s Kalkaji.