The DMRC is not the first to take this initiative. Earlier, Bengaluru Metro and Kochi Metro adopted a similar concept from Mexico. 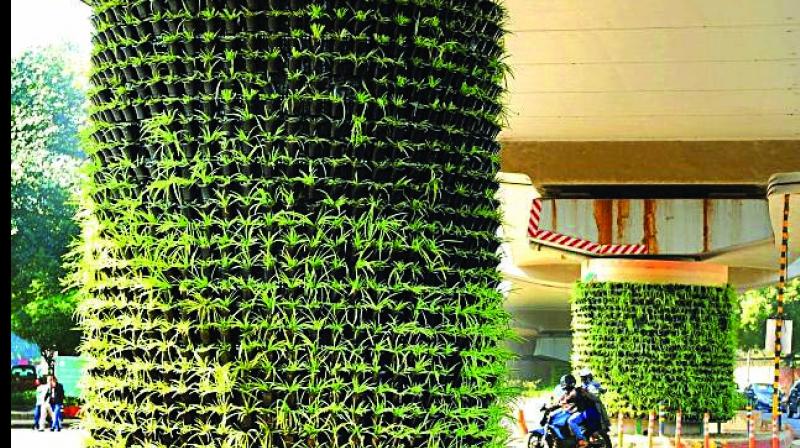 Vertical garden on one of the Metro pillars.

These vertical gardens will reduce pollution in the capital. Vertical gardening involves growing plants on vertical surfaces of urban structures such as Metro pillars, flyover columns and buildings with an integrated water irrigation system. With this concept, the concerned agencies will neutralise air pollution, trigerred mostly by dust and vehicular pollution. These gardens will help reduce urban heat island effect and smog; purify outside polluted air; act as a sound-proofing barrier; create a healthy habitat for birds and insects; increase real estate value among others.

Vertical gardens are those that grow vertically, along walls or pillars, with the help of trellis (which are wooden frames) or similar support systems.  Such gardens allow people to make use of limited spaces and is an excellent way to give a green boost.

Earlier in a first such initiative by Delhi Metro, eight pillars of the elevated Blue Line between Mandi House and Pragati Maidan stations sport vertical gardens.

The DMRC is not the first to take this initiative. Earlier, Bengaluru Metro and Kochi Metro adopted a similar concept from Mexico. In Bengaluru and Kochi, every fourth to sixth pillar sports a vertical garden as the other pillars are used for advertising.