SC Rana, who owns the ambulances,told the police that he had left for his house on Monday night just half an hour before the fire broke out. 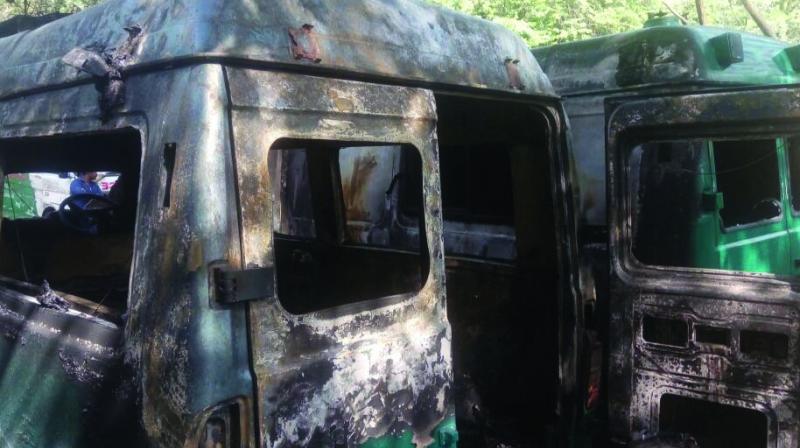 Police said the deceased, identified as Rahul (24) and Bablu (24), were sleeping at the back of the ambulance while Subodh (26) was sleeping in the driver’s seat.

New Delhi: Two persons were allegedly charred to death while another was critically injured after a fire broke out inside the ambulance where they were sleeping on Monday night.

Preliminary probe reveals that the cause of fire might be a mosquito coil which was lit inside the vehicle. The incident took place at around 12.50 am when a dust storm swept through the city.

According to an official from the Delhi Fire Service (DFS), the blaze soon spread to two other ambulances parked at a DDA park in the Sheikh Sarai area.

“At least four fire tenders were rushed to the spot. It took half an hour to douse the fire. Two charred bodies were recovered from one of the ambulances, while one was found to be critically injured,” said a DFS official.

Police said the deceased, identified as Rahul (24) and Bablu (24), were sleeping at the back of the ambulance while Subodh (26) was sleeping in the driver’s seat. Subodh received 40 per cent injuries and is recuperating at Safdarjung Hospital.

SC Rana, who owns the ambulances, told the police that he had left for his house on Monday night just half an hour before the fire broke out.

“My ambulances were parked here. It is very unfortunate that two of my employees died in this incident. We have full sympathy for their family,” said Mr Rana.

DCP (South) Romil Baaniya said a case under Section 285, 338, and 304A of the IPC has been registered at Malv-iya Nagar police station. A CFSL (Central Foren-sic Science Laboratory) team has been asked to inspect the spot to find out the exact cause of fire.