Homeless scavenger who cleans city’s filth for own satisfaction

Mr Sharma hardly has four hours of sleep at night. He is up by 4 am to do his job, which he believes demands continuous attention. 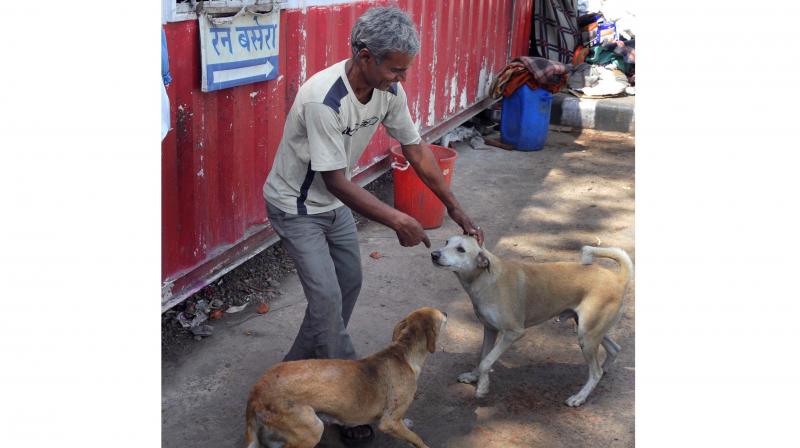 Mr Sharma has no money, he never did. Not that it ever bothered him. The only thing that bothers him is the garbage lying around.

New Delhi: Everyone believes Salandar Sharma is mad, except for a doctor from AIIMS who sometimes visits him in his jhuggi. “He got five of his daughters married, he is anything but mentally unsound,” the doctor said. But Mr Sharma does give people good reason to question his sanity. He picks garbage along the stretch of the road in front of Safdarjung Hospital, a job nobody ever pays him for. Mr Sharma, however, couldn’t care less about money.

Mr Sharma is a native of Bihar, with an education up to the ninth standard. He cannot ever remember having any ambition in life. The only thing that excites him is a good cleaning. He came to Delhi 12 years ago, to treat himself at AIIMS for stomachache. “It never turned out to be a serious ailment,” he said. “One fine day, the doctors told me to have a good bath, put on clean clothes, and I was perfectly cured,” he added with a triumphant smile.

For 12 years, Mr Sharma has been staying at the same place, doing the same job. His neighbors call him “AG”. None of them are aware of his real name. “Ayeji” was what a certain policemen once called him. The address eventually turned into a name and Mr Sharma became “AG”, the scavenger obsessed with hygiene. “I cannot bear to live in an unclean place, nor can I see anyone else do it. It’s what I do for my own satisfaction,” he added. Most people dismiss him as mad, while others call him great. As for Mr Sharma, he doesn’t give two hoots about such opinions.

“He should be made the face of the Swachchh Bharat,” said the doctor, who chose to remain anonymous. He had tried telling Mr Sharma’s story on social media, posting it on Facebook and Twitter. “People hailed it, showering likes and comments, but no one really came to his help,” he added. The doctor and the owner of an optical store adjacent to Salandar’s jhuggi occasionally help him with money. Then, there is the cook who fills Mr Sharma’s white bowl with some curry whenever he goes to his eatery, which is nearby. Faiz Akram, the owner of the optical store, had let Mr Sharma about a square meter of space where he built his odd semblance of a home with a few ropes, blankets and sticks. It comprised something of everything, including an old ghee container, an empty upturned bucket and several sheets of plastic. The roof was a hoarding from the optical shop, which worked fine except that it leaked a little during the rains. But Mr Sharma loved his humble abode and wouldn’t give it up for anything. The caretaker at the neighboring night shelter had tired of offering him a bed. In the winters, Mr Sharma would put together a few cardboards to keep out the cold. In the summer, he would sleep out in the open. “I like sleeping as the wind blows,” he said.

Beside a rather unbearable stench inside the shelter, there were two small clay idols on the ground, of the Hindu goddesses Lakshmi and Saraswati. There was also a stray dog, who slept blissfully as Mr Sharma went about scavenging. “AG’s love for dogs is quite famous,” said Raju, caretaker at a nearby dharamsala. “This is the son, and this is the father,” said Mr Sharma, pointing at the two strays he was playing with. The one sleeping inside refused to budge in spite of Mr Sharma’s repeated calls.

Mr Sharma does not discard everything he picks up. Some he keeps for himself, others he keeps outside his door for people to pick up. “There are needy people around here. They do take things if they are usable,” he said. The odd collection outside Mr Sharma’s door often ends up getting Akram into trouble as it grows into a heap of garbage (cartons full of discarded things ranging from rotting vegetable to defunct medical accessories). Owing to this, Akram has to pay Rs 1,000 to the NDMC every month. He doesn’t mind doing his bit for Mr Sharma, who he believes is doing quite some social service.

Mr Sharma has no money, he never did. Not that it ever bothered him. The only thing that bothers him is the garbage lying around. “I disappear for one moment and the garbage gathers again. You have to be at it continuously to make sure that the place is clean,” he said. Mr Sharma hardly has four hours of sleep at night. He is up by 4 am to do his job, which he believes demands continuous attention. The other thing is that his efforts are hardly ever acknowledged.