Market complex has around 27 ATMs, but most machines not working. 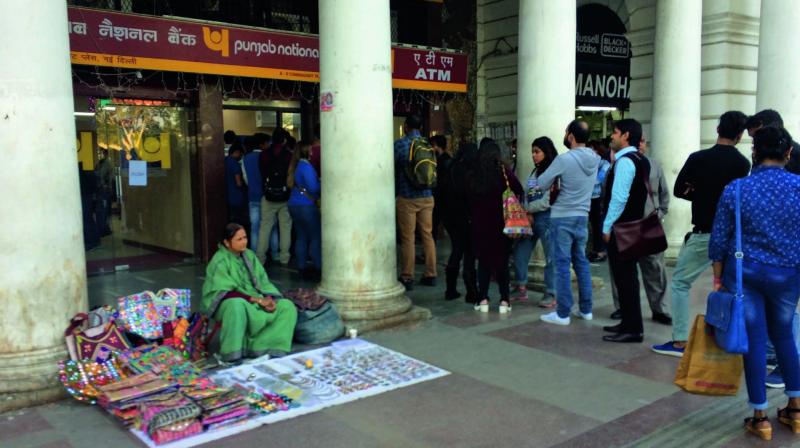 People stand in a queue outside an ATM in CP.

New Delhi: Serpentine queues stretched outside the 15-foot covered corridors of Connaught Place’s inner circle on Wednesday. The commercial hub in the heart of Delhi has at least 27 ATMs.

At about 4 pm, after the ATM machines of the ICICI Bank in Block A ran out of cash, the adjacent Punjab National Bank (PNB) ATM instantly saw long queues. “The PNB ATM went out of order half-an-hour after the ICICI bank ATMs stopped dispensing cash,” Shashwat Singh, one of those trying to withdraw cash at CP, said.

Mr Singh, who is a Vikaspuri resident, later found his way to the Union Bank ATM at F block. At least five people were already in the queue. Minutes after Mr Singh joined the queue, four to five more people followed.

A staff member of the ICICI bank at A block said that six of the ten ATMs in the bank’s premises were replenished with cash before the market opened in the morning. The fresh supply of banknotes arrived at around 5.30 pm.

“Come after 20 minutes,” the bank’s security guard said when asked whether the ATMs have been loaded with cash. Most of the ATMs at the Rajiv Chowk Metro station were also out of cash around 6 pm. A queue longer than that at PNB was seen at the State Bank of Patiala.

The pinch of demonetisation was also felt in other markets across Delhi. An Axis Bank ATM in Mayur Vihar Phase 1, which saw long queues days after the old currency notes were withdrawn from circulation, remains perennially cash-strapped in the evenings. “Only two ATMs in the market area gets regular cash supply,” Kumar Ankit, a local resident said. A sizable number of ATMs at markets in Janakpuri, Green Park, Noida Sector 16 and 18 are also not getting enough cash supply.