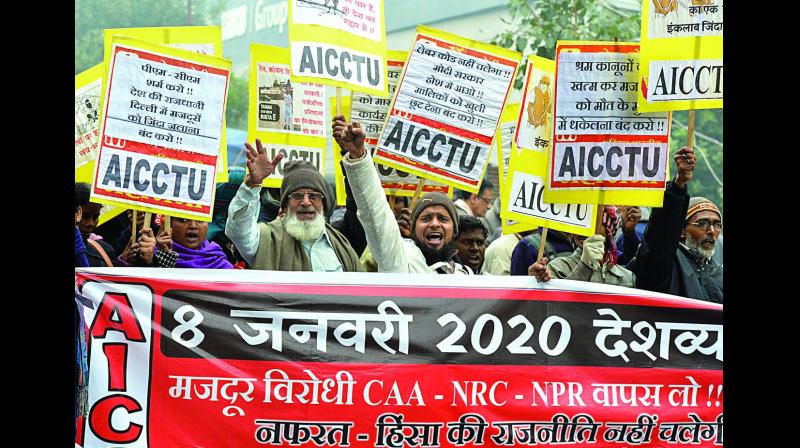 Protesters shout slogans in support of a nationwide general strike called by trade unions aligned with Opposition parties to protest against the government’s economic policies, in New Delhi on Wednesday. (Photo: Biplab Banerjee)

NEW DELHI: The national capital remained largely unaffected by the nationwide strike called by the trade unions on Wednesday, though most industrial workers stayed away from work.

Officials said no trains have been affected in the national capital, but some Delhi-bound trains from Odisha and West Bengal were affected.

Widespread intermittent rains in the national capital also reduced the intensity of the strike. The industrial areas of Mayapuri and Wazirabad witnessed protest march. At the ITO, workers affiliated to Left unions gathered in support of the general strike called by 10 central trade unions against the Central government’s “anti-worker” policies.

CPI(M) leader Subhashini Ali, who took part in an agitation at the ITO, said they were protesting against the “anti-labour” laws of the Centre.

“We are protesting against the anti-labour laws of the Modi government, and the labour codes they plan to introduce which are against the welfare of the workers. They want to sell even a Maharatna like Bharat Petroleum (Company Ltd) and move towards privatisation,” she said.

The trade unions have claimed around 25 crore people are participating in the strike to protest against the government’s “anti-people” policies.