8 salons, many restaurants sealed by NDMC. 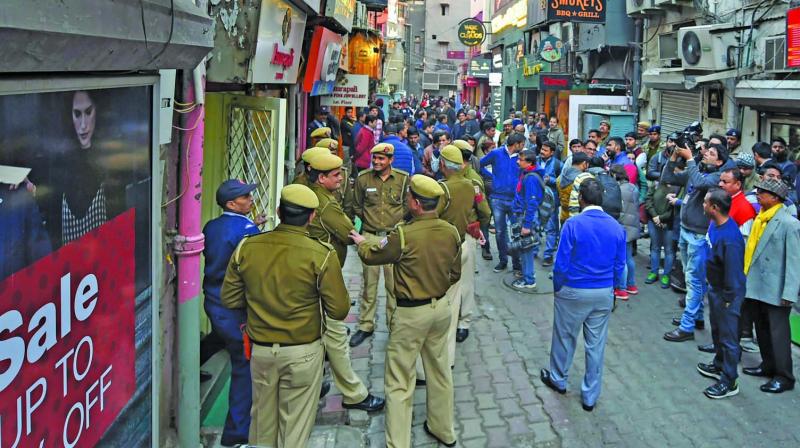 Police personnel outside shops in Khan Market on Monday. The NDMC on Monday sealed many shops in the upscale market for flouting civic norms. (Photo: PTI)

New Delhi: The crackdown against unauthorised construction in the national capital reached the posh Khan Market on Monday with the New Delhi Municipal Council (NDMC) sealing the terraces and open spaces of eight major establishments, including salons and restaurants.

The traders associations cried foul, saying they were not given prior notice if any violations were found at their end.

The action comes following order by a SC-appointed monitoring committee asking the NDMC to seal commercial establishments in Khan Market for alleged violation of provisions of the 2021 master plan and non-payment of user conversion charges.

“We conducted an inspection on Monday and sealed portions of eight major establishments which were found violating norms.

Another sealing drive will be conducted on Tuesday,” a senior NDMC official said.

Among the establishments which have been sealed during the drive include restaurants Khan Chacha and Smokey’s Grill, salons Geetanjali, Javaed Habib’s and Affinity and Amrapali Jewellery store.

“A misconception has been created that traders in Khan Market are not paying conversion charges. We are operating in a elite market and believe in abiding by norms.”

“If at all violations were found, notices could have been sent first to rectify them and action taken later. We will speak to the chairman about this,” he said.

Vishal Sharma, the owner of Affinity Salon said they were not given any notice before the sealing action. The Smokey’s Grill’s representatives said they were asked to remove all things including the generator from the rooftop area.