The BJYM activists tried to move past a barricade near Mr Kejriwal’s Flagstaff Road residence, but were stopped by the police. 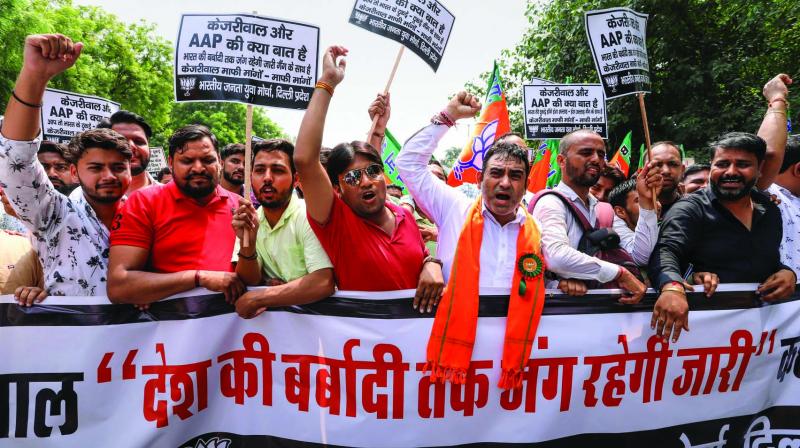 New Delhi: The members of BJP’s youth wing, BJYM, staged a protest near chief minister Arvind Kejriwal’s residence in the national capital, on Saturday, demanding him to give prosecution sanction in the 2016 JNU sedition case.

The BJYM (Bharatiya Janata Yuva Morcha) activists tried to move past a barricade near Mr Kejriwal’s Flagstaff Road residence, but were stopped by the police. Many of them were taken away to a nearby police station from where they were released later. The protesters raised slogans against the Kejriwal government and also tore down posters and banners outside the chief minister’s residence.

“There were media reports that the AAP government has rejected permission for prosecution of former JNU Students’ Union (JNUSU) president Kanhaiya Kumar and others in the sedition case.

“Mr Kejriwal should clarify if he sides with the anti-nationals, who raised slogans like Bharat tere tukde honge in JNU. If he does not, he should give permission to prosecute the accused in the JNU sedition case of 2016,” said Sunil Yadav, the BJYM’s Delhi unit president.

Mr Kejriwal had said on Friday that the Delhi government has not yet taken any decision on the prosecution sanction against Kanhaiya Kumar and others in the sedition case. He, however, said that the home department of the Delhi government will take an appropriate decision after taking all facts into consideration.