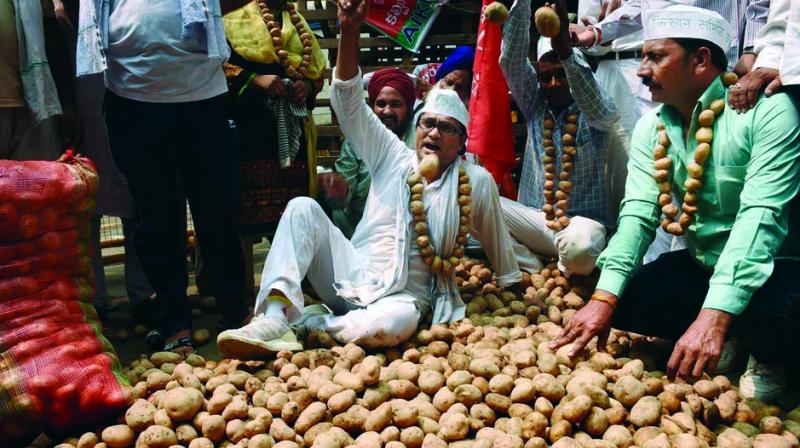 Under BBY, the government does not procure the produce from farmers.

New Delhi: The ongoing farmers’ agitation saw a spiralling impact on potatoes in Delhi, with the retail price of the vegetable going up from Rs 10 to Rs 20 per kg. The prices of other vegetables and fruits, however, remained unaffected.

Bhushan Yadav, a commission worker for the past 35 years, said: “Supply of potatoes has decreased rapidly due to the ongoing farmer’s agitation because of which the prices of potato have shot up from Rs 300-Rs 400 to Rs 500-Rs 600 per 50 kg tray.”

“Previously, on Saturday, one tray (25 kg) of tomatoes was worth Rs 300 because of low supply due to farmers’ agitation. But now, as the supply has increased from 200 crates to 2,000 crates, the prices have yet again dropped to Rs 50-Rs 100 per tray,” said Lakhan, a 26-year-old commission worker from Bihar.

The 10-day long nationwide protest is being spearheaded by Rashtriya Kisan Mahasangh, which is the parent organisation of over 100 farmer outfits. Their demands include a loan waiver, high prices for farmers’ production, and immediate implementation of the Swaminathan Commission rural report.

When asked about onions, there seemed to be a different story as suggested by Munish Kapoor, the 30-year-old owner of Om Sai Ram Traders in Azadpur Mandi.

“There is no major impact on the prices of onion. We need to thank the Madhya Pradesh government for its initiation to include onion with three other Rabi crops under the Bhavantar Bhugtan Yojana (BBY), a price deficiency payment scheme,” he said.

Under BBY, the government does not procure the produce from farmers. Instead, when prices fall below the minimum support price (MSP), the government pays the difference between the MSP and a modal rate worked out by taking the average of selling price in the mandis in three states over a fixed period.

Recently, the chief secretary of Delhi government conducted a meeting to discuss the impact of farmers’ agitation on Delhi’s food market. Essential commodities such as tomato, potato, onion, milk and milk products, food grains, eggs and poultry, were discussed at the meeting.

“It was informed by the secretaries of the Agricultural Produce Marketing Committees (APMCs) that there has been a negligible impact of the farmers’ agitation on the supply of the essential commodities in Delhi. The total arrival and prices have been steady,” the government said in a statement.

However, the government also acknowledged that the supply of tomatoes has been “slightly impacted.”