The Met department has warned fishermen not to venture into the sea along these areas from June 8 afternoon till further notification. 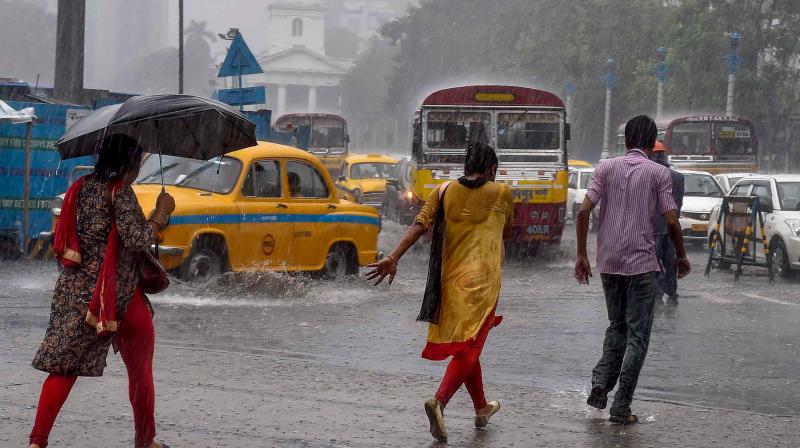 People cross a road during a heavy downpour in Kolkata on Thursday.

Kolkata: A low pressure, being formed in the Bay of Bengal, will trigger the advance of southwest monsoon in West Bengal and Odisha from June 9, the meteorological department said here on Friday.

The low pressure is likely to intensify into a depression by Saturday and move north-northwestwards across West Bengal and Bangladesh coasts, the MeT department said and forecast isolated heavy rains in West Bengal and parts of Odisha from June 9.

It has forecast normal monsoon this year. Its scheduled date of arrival in the Gangetic West Bengal is June 9 and the formation of the low pressure has made conditions favourable for it to keep the date.

Under the influence of the weather system, the southwest monsoon is likely to advance into some parts of Odisha, West Bengal and Sikkim and most parts of Bay of Bengal from June 9 to June 11, it said.

Squally wind with speed reaching 40 to 50 km per hour, gusting to 60 kmph is very likely over north Bay of Bengal along and off West Bengal, Odisha and Bangladesh coasts.

The Met department has warned fishermen not to venture into the sea along these areas from June 8 afternoon till further notification.

It also asked fishermen, who are at deep sea, to return by June 8 afternoon as sea condition will be rough to very rough in north Bay of Bengal.