The chief minister said it was difficult for four-wheeler ambulances to enter narrow lanes. 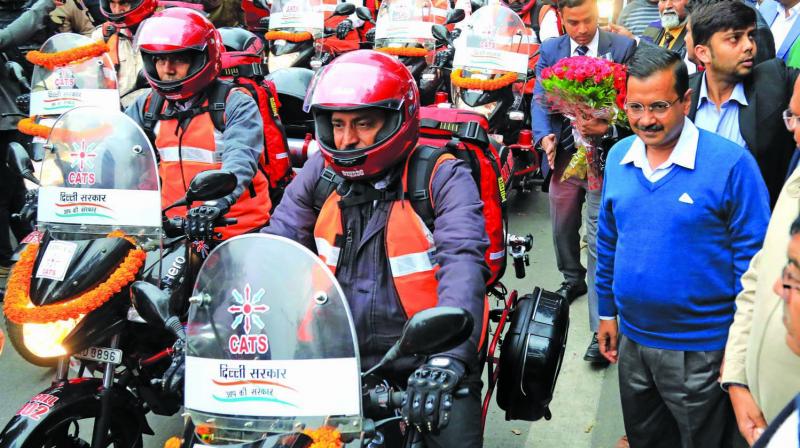 A fleet of bike ambulances during its launch by Delhi chief minister Arvind Kejriwal in New Delhi on Thursday. (Photo: BUNNY SMITH)

Talking to reporters after flagging off the fleet of 16 bike ambulances outside the Delhi Secretariat, Mr Kejriwal said it was a big step taken by the Aam Aadmi Party government for the people.

The chief minister said it was difficult for four-wheeler ambulances to enter narrow lanes.”If there’s a medical emergency in narrow bylanes, bike ambulance can go there and immediately provide its service to patients.”

The AAP chief said the number of bike ambulances would be increased in the coming days. “This is a big step in the health sector. Everybody knows that the Delhi government is doing good works in the education and health sectors, and it would also be good from the traffic point of view. These bikes also come loaded with a portable oxygen cylinder, a first aid kit and dressing materials, air-splints, foldable transfer sheets, ambu bags, glucometer, pulse oximeter and a portable manual suction machine.