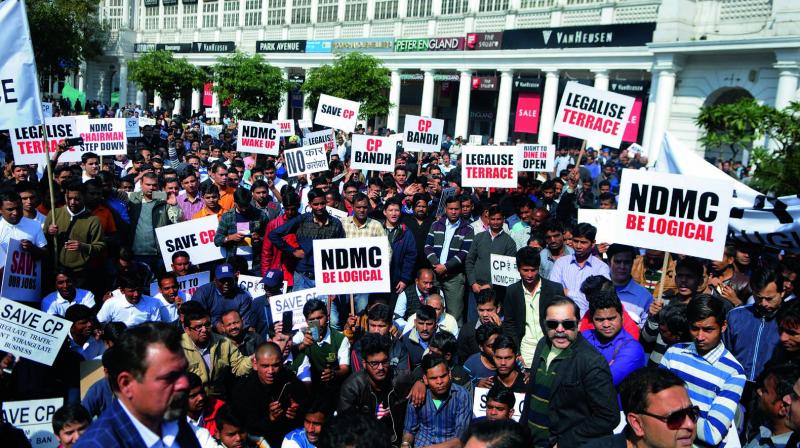 Traders (above) hold a silent protest in Connaught Place on Tuesday against NDMC authorities over the ban on entry of private vehicles. (Photo: Biplab Banerjee)

New Delhi: Traders in Central Delhi’s upscale Connaught Place on Tuesday observed a half-day shutdown to protest against the New Delhi Municipal Council’s proposal to make the heritage market free of vehicles. Local traders have also threatened to shut shop if the plan is rolled out later this month.

The decision to make CP vehicle-free was announced in January following a meeting chaired by Union minister Venkaiah Naidu and attended by officials of the Urban Development ministry, NDMC and the Delhi police.

“CP was closed until 3 pm on Tuesday as traders want to voice their strong disagreement against the change in traffic and parking planning in the market. We had also invited representatives from various political parties to help us chalk out the future strategy but no one turned up for today’s meeting,” president of New Delhi Traders Association Atul Bhargav said. The heritage market was already the most pedestrian-friendly commercial centre in the country with 15 feet of covered corridor and 20 feet of walking space, local traders said. If implemented, the civic body’s plan will do away with parking lots in CP, were currently thousands of vehicles are parked every day.

Once the parking facility is withdrawn, visitors would have to park their vehicles at one of three multi-level parking facilities in the area and then walk till CP.

“We have been running our shop for the last 80 years. The NDMC’s plan of making the market vehicle-free will affect our business badly,” Naresh Kumar Marwah, who own of the oldest shop in the market, said.