Garbage piling up in East Delhi. 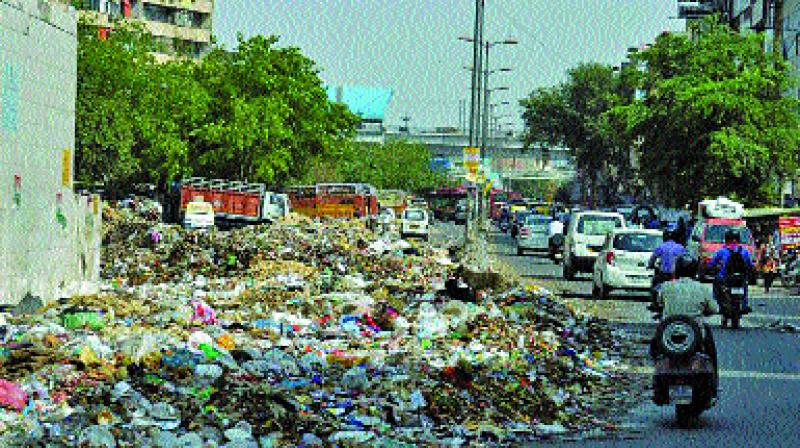 New Delhi: The Delhi government is likely to give funds for payment of salaries for striking sanitation workers of EDMC which is due for three months, minister Satyendar Jain said on Saturday and alleged that corruption in the BJP-ruled civic body is the “main reason” behind its poor financial health.

“The Delhi government is working on providing relief to the employees of EDMC. The government will give funds only for salaries of employees. We have to do something for them,” he told mediapersons here.

Hitting out at BJP corporators of East Delhi Municipal corporation, the Delhi home minister alleged that instead of collecting tax, they are “interested in collecting bribe”.

“Instead of collecting tax, they are interested in collecting bribe. If someone constructs home, they get Rs 10 lakh as bribe. That is the main reason behind their poor financial condition. They (EDMC) collect Rs 15 crore annually through advertisements, but they get a bribe of Rs 15 crore per month through illegal hoardings,” he alleged.

Mr Jain also convened a meeting of senior EDMC officials to discuss the situation and find ways to end the strike of around 17,000 sanitation workers.

Demanding payment of salaries pending since October month last year, EDMC sanitation workers went on an indefinite strike on Friday, which is likely to trigger a serious garbage disposal and health crisis in the trans-Yamuna region of the capital city.

The Delhi BJP, meanwhile, blamed Arvind Kejriwal for the ongoing salary crisis. Delhi BJP president Manoj Tiwari said that the people of the national capital and municipal employees well understand the dirty politics of the Kejriwal government. He added that the ruling Aam Aadmi Party (AAP) will pay a heavy price for this in the ensuing municipal elections.

The protesting sanitation workers also locked a key depot of the civic body in Jhilmil area, preventing trucks from dumping garbage at the Ghazipur sanitary landfill site. East Delhi generates a large quantity of garbage with Ghazipur landfill site receiving on an average 2,500 tonnes of waste daily. The workers staged protest at several areas in East Delhi and raised slogans against the EDMC.