Taqi Hassan was able to undergo a complex life-saving surgery with the help of funds raised through social media appeals for help. 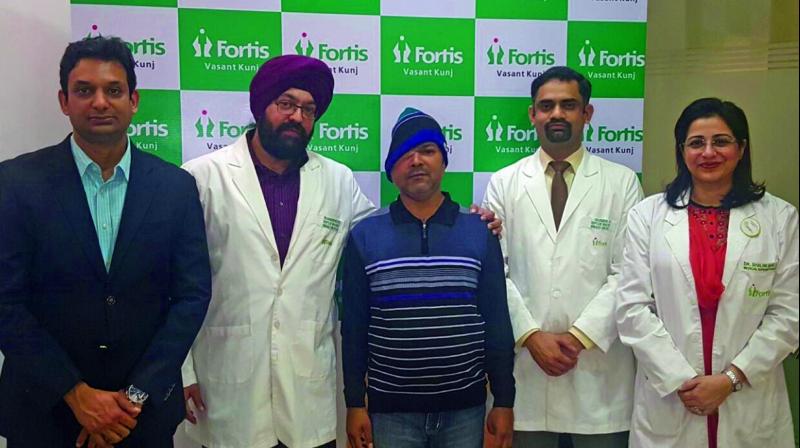 He received Rs 8 lakh through donations by Sikh and Muslim communities from USA and Australia, which was used to remove a tumour via an anterior craniofacial resection surgery. The patient’s face was partially reconstructed with flap from the waist in a 16-hour complex surgery to remove the tumour and prevent injury to the brain.

According to doctors, Taqi went abroad to work as an electrician. However, an accidental fall caused serious injuries to his head. Initially, he was treated for his dizzy spells. However, he developed a swelling, later diagnosed as a tumour on the forehead above his right eye.

“He underwent his first surgery in Lucknow to get it removed. Soon after, the tumour recurred twice at the same spot for which he underwent repeated surgeries. Post his fourth surgery, Taqi was mentally, physically, financially, and emotionally drained. He had no money and had lost all hope while the tumour reappeared and was spreading rapidly to the orbit, eyeball and face, almost touching his brain cells,” said the facility director of Fortis Flt Lt Rajan Dhall Hospital, Abrar Ali Dalal.

It was then that a relative residing in Australia suggested appealing for funds on social media. “The story resulted in support pouring from all quarters, even from across the border. Well-wishers from Australia and USA and from different communities came forward to help fund my fifth surgery. A sum of Rs 8 lakh was raised to assist in the surgery at the facility. Their support saved my life,” said Taqi.

He underwent anterior craniofacial resection surgery. Explaining the procedure, the head of the department of head, neck and breast oncoplasty at the Fortis Flt Lt Rajan Dhall Hospital, Dr Mandeep S Malhotra said, “A large mass of 11 cm X 7 cm with solid cysts, involving right frontal sinus and right orbit with defects, was removed from his right forehead. His right eye ball was dissected and a flap transplant was done where a section of skin was taken from his waist and stitched up as a flap around the hollow space on his right forehead extending up to his ears.”

Director and head of neurosurgery at Fortis Flt Lt Rajan Dhall Hospital, Dr Rana Patir, said: “A part of his brain was also affected. Hence the surgery became complicated as we had to remove the skin layer of the brain. His forehead was infected and we planned to remove it. Bone grafting wasn’t possible in his case so we decided to construct the skull part with skin only. I was overwhelmed to see his recovery.”