Trains will operate in batches of four-hour each from 7-11 am in the morning and 4-8 pm in the evening in the first stage, officials said 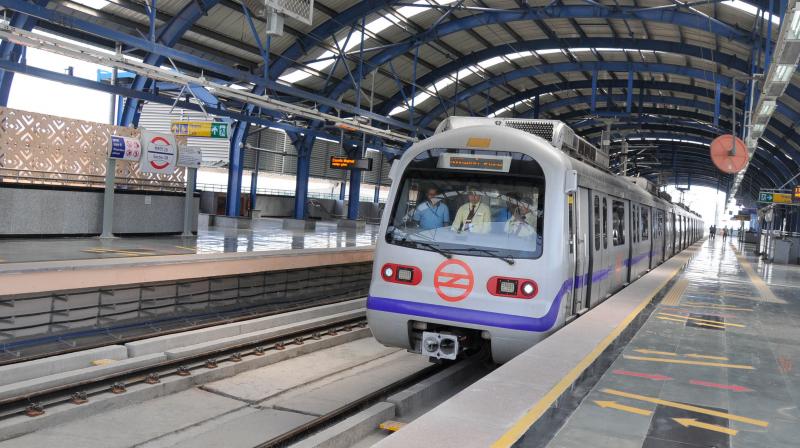 New Delhi: The Delhi Metro resumed services with curtailed operation of the Yellow Line on Monday after being closed for over five months due to the novel coronavirus pandemic.

The Yellow Line connects Samaypur Badli in Delhi to the HUDA City Centre in Gurgaon.

"We are on our way. It's been 169 days since we've seen you! Travel responsibly and commute if it's only necessary. #MetroBackOnTrack," the DMRC tweeted and posted a video clip of the first train leaving HUDA City Centre.

"A few happy faces from our first journey after more than 5 months. #MetroBackOnTrack," the DMRC said in another tweet and posted pictures of some commuters wearing masks inside train coaches.

On the station premises, passengers were permitted to enter the concourse only after temperature checks with thermal guns and sanitisation of hands.

The Home Ministry had recently issued guidelines allowing metro services in the country to resume operations in a graded manner, following which the Delhi Metro Rail Corporation (DMRC) said it would be done in three stages from September 7-12.

Under stage one, Yellow Line or Line 2 and Rapid Metro were made operational with restricted service hours, a DMRC official said.

Trains will operate in batches of four-hour each from 7-11 am in the morning and 4-8 pm in the evening in the first stage, officials said.

Over a period of next five days i.e, by 12th September, rest of the Lines will also be made operational with all safety measures in place to check the spread of Covid-19 in the Metro premises which requires everyone to follow a new normal of social distancing, face mask and hand sanitisation.

Metro services in the National Capital Region was closed since March 22 due to the pandemic. The DMRC has appealed to people to use the rapid transport only if urgently needed.