Ruckus on Day one of Assembly session 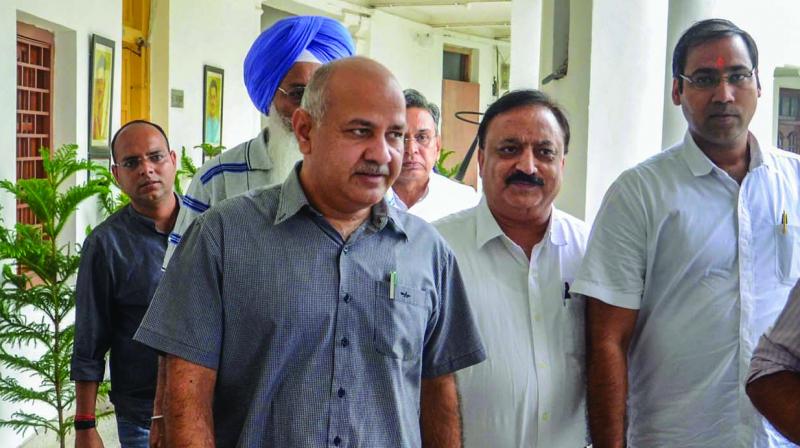 Deputy chief minister Manish Sisodia on the first day of the Monsoon Session of the Delhi Assembly in New Delhi on Monday. — PTI

New Delhi: High drama ensued in the Delhi Assembly on Monday after a BJP legislator used an “objectionable” word against his colleague from the ruling AAP during a discussion on water shortage in the national capital. Follow-ing the ruckus, Delhi chief minister Arvind Kejrwial hit out at BJP, accusing the saffron party of dividing India in the name of Hindus and Muslims.

The action came after AAP legislators demanded action against the Viswas Nagar BJP MLA, saying his remark was an “insult of the House.”

Mr Sharma was speaking on the issue of water shortage in his constituency, during which he also criticised some Delhi government officers. When Amanatullah Khan opposed this, Mr Sharma used the objectionable word against him. Later, the Speaker expunged the word used by Mr Sharma from the House proceedings.

While referring the matter, Speaker Ram Niwas Goel said that the word used by the BJP MLA is “objectionable” and asked the committee to present its report as soon as possible. Following this, AAP legislators trooped into the Well of the House demanding strict action against the BJP legislator.

When the Speaker refer-red the matter to the Pri-vileges Committee, BJP MLA Jagdish Pradhan walked out of the House to register his protest.

“Look at the BJP MLA — shameful. BJP wants to divide India in the name of Hindus and Muslims. This is what Pakistan wants. BJP is fulfilling the intensions of Pakistan. Why did Narendra Modi go to Pakistan to meet Nawaz Sharif? Why did he call ISI for investigation in Pathankot? What is the relationship between BJP and the Pakistanis?” Mr Kejriwal said.

In the House, deputy chief minister Manish Sisodia too slammed Mr Sharma, saying his remarks could not be tolerated and demanded action against him. He said those in power at the Centre and in the Opposition in Delhi have a mentality of “dividing” the country.

The deputy chief minister said this country belonged to all and not just a particular religion, adding that this is not just the question of an MLA and that this could not be tolerated in the House.

Following the ruckus over the issue, the Speaker adjourned the House for 30 minutes. When the House met again, AAP’s Burari MLA, Sanjeev Jha, proposed to refer the matter to the Privileges Committee of the House.

While proposing to refer the matter of Mr Sharma to the committee, Mr Jha alleged that the country cannot be “divided” in the name of religion. Mr Jha said he wanted to know how Mr Sharma could use foul language against the officers working with the Delhi government.