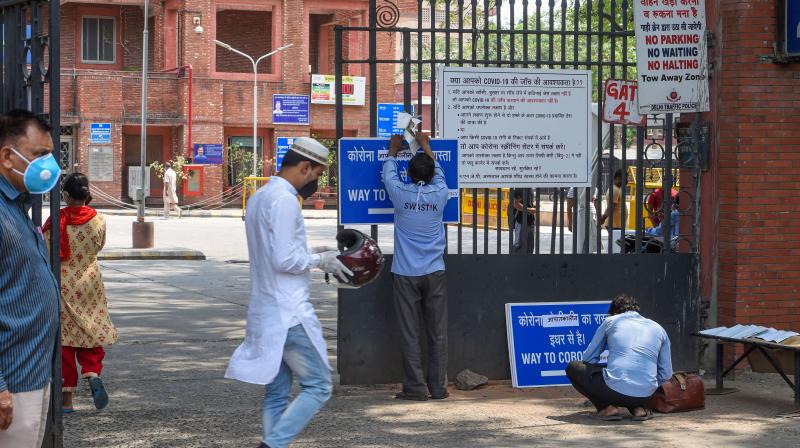 A worker hangs a notice on the main gate of the LNJP Hospital in New Delhi. (PTI)

New Delhi: With hospital beds in desperate short supply for COVID-19 patients, Delhi's chief minister Arvind Kejriwal announced that hospitals in New Delhi will only treat people from the city even after the national capital territory opens its borders with Uttar Pradesh and Haryana on Monday.

The Delhi patients only rule will, however, not apply to hospitals run by the central government.

The national capital is gearing up to open up its malls, restaurants and religious places from Monday. However hotels and banquets will remain closed as the Delhi government might need to convert them into hospitals in coming time.

He said if people from other cities come to Delhi for specific surgeries, they will be provided treatment at private hospitals.

"Delhi's health infrastructure is needed to tackle the coronavirus crisis at the moment," the chief minister said.

The central government has allowed the reopening of shopping malls, hotels, restaurants and other hospitality services along with the places of religious worship to people from June 8, however, these facilities will not be able to resume operations inside containment zones designated by authorities in states.