The Delhi government has also issued a showcause notice to the authorities of Tughlaqabad depot. 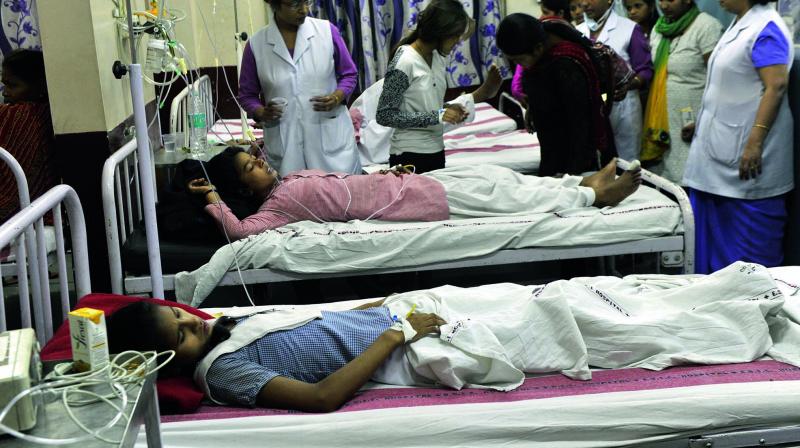 School students receive treatment at a hospital in Delhi on Saturday after being exposed to a gas leak. (Photo: G.N. Jha)

New Delhi: Around 475 girls at two schools in South Delhi’s Tughlakabad area were hospitalised on Saturday after toxic fumes spread due to chemical leakage at a container in the area.

The leakage from a container filled with chloromethyl pyridine, a chemical used to produce insecticides and pesticides, parked near their schools led to the incident. Preliminary investigations revealed that pesticides from the container fell on the nearby road.

“The pesticides turned into poisonous fumes after it came into contact with the sunlight,” a local police officer told this newspaper. The students and nine teachers of Rani Jhansi Sarvodaya Kanya Vidhalaya and Government Girls Senior Secondary School were immediately rushed to the nearby hospitals — ESI Okhala, Batra, Apollo, Majethia and AIIMS.

As many as 406 students and teachers were discharged and the remaining are still undergoing treatment at various hospitals. The condition of those undergoing treatment is said to be stable. According to the police, a call was received at 7.35 am about some chemical leakage at customs area of Tughlaqabad depot.

The chemical in the container was imported from China and was to be taken to Sonepat in Haryana, it said. Following the incident, teams of police and Natio-nal Disaster Response Force (NDRF) as well as CATS ambulance reached the spot.

The Delhi government has also issued a showcause notice to the authorities of Tughlaqabad depot. An NDRF official said there were 80 drums in the container and the chemical leaked from three-four of them.

Suniti, a student of Class 8 in Rani Jhansi School, said, “I felt dizziness and irritation in my eyes. First, I washed my face, but there was no relief. Three of my friends even fainted and our teachers rushed them to the hospital. I was also taken to the hospital and discharged after two hours.”

Deputy chief fire office Rajesh Pawar said, “A chemical leakage at the customs area of Tughlaq-abad depot caused irritation in eyes of the students studying in Rani Jhansi School. The students were shifted to nearby hospitals and are reported to be normal.”

A FIR under relevant sections of the IPC and environment protection act has been filed against unknown persons.

Meanwhile, later in the day, the parents of the victims blamed the school authorities for “carelessness” while stating that the school should not have been permitted to function in such “harmful” premises.

“Looks like the container started leaking at around 2 am and the people nearby put mud and water to stop the leak at that time, but they could not anticipate its impact,” said Narender Singh Raw-at, a computer hardware serviceman, whose two daughters suffered from the chemical leakage.