Doctors protest against bill that aims to replace MCI

Services hit in many govt hospitals across city. 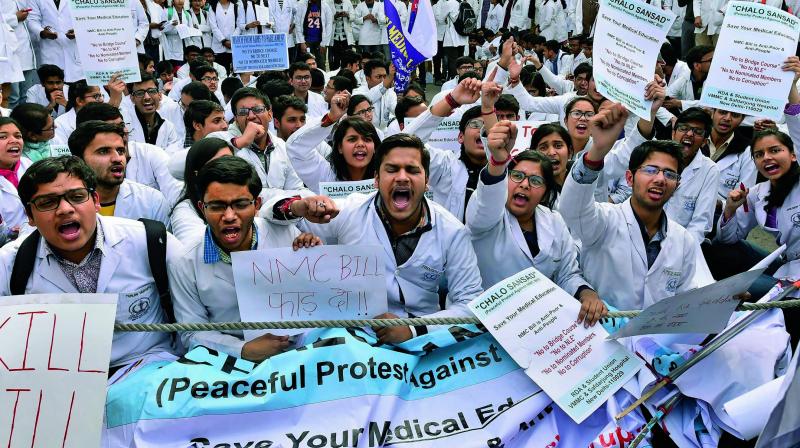 New Delhi: Services at AIIMS, Safdarjung and many other Delhi government hospitals were hit after doctors, protesting the National Medical Commission Bill, took out a march to Parliament.

The doctors were not allowed to march till the Parliament building and meet health minister J P Nadda. At least four of them were detained for some time at Mandir Marg Police Station.

Healthcare services were affected at various Delhi and Central government hospitals, including AIIMS and Safdarjung, as only emergency wards were operational. Doctors from AIIMS and Safdarjung blocked the road outside the hospital and protested by sitting outside the Metro station. They raised slogans against the health minister and the bill. The strike was ended after the health minister met a doctor’s representation at Nirman Bhawan. “Mr Nadda said on a positive note that the exit exam and bridge course won’t be passed, but are subject to further discussion with the standing committee. Other points shall also be discussed in front of the standing committee where representatives of the doctors’ association shall speak. The strike was called off, with a note that such protest will be launched again in case the standing committee rejects our proposal,” said Resident Doctors’ Association, AIIMS.

Meanwhile, Federation of Resident Doctors’ Association said that a meeting is being organised with the health ministry and FORDA representatives within three days and the government will be ‘rectifying the faulty proposal of bridge course and exit exam’.

“Assurances have been given that postgraduate seats will be increased,” it added.

The NMC Bill, which was tabled in Parliament in December and was later sent to a parliamentary standing committee, seeks to replace the Medical Commission of India with another body and also proposes allowing practioners of alternative medicines, such as homoeopathy and ayurveda, practise allopathy after completing a ‘bridge course’.