The JNU administration appealed to the students not to leave the campus and assured that steps would be taken to normalise the situation. 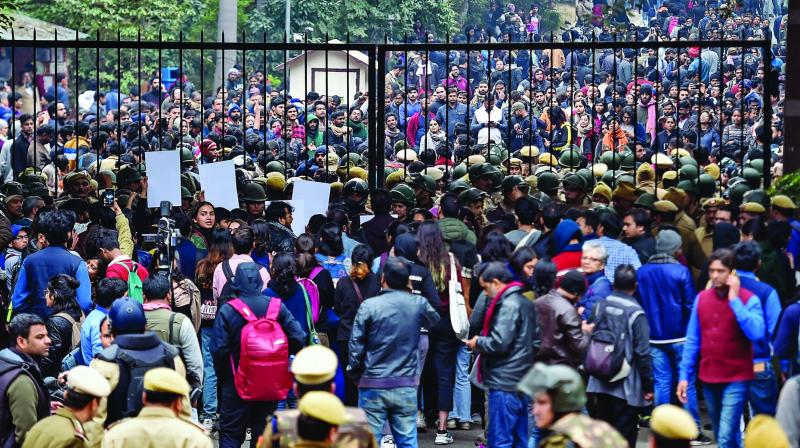 New Delhi: A day after masked goons armed with iron rods and sticks went on a rampage in the JNU campus, hundreds of students and teachers on Monday held peaceful protests in the varsity demanding action against those involved in the violence.

The JNU administration appealed to the students not to leave the campus and assured that steps would be taken to normalise the situation.

An uneasy calm prevailed in the university where heavy police deployment had been made to prevent any untoward incident. The authorities only allowed students with valid ID cards inside the campus. However, these measures did not assuage the concerns of students over their safety.

Though an FIR was registered in connection with Sunday’s violence, no arrests were effected until late Monday night.

“A fact-finding committee under Jt. CP (West) Shalini Singh has been set up to look into all these aspects,” Delhi police PRO Mandeep Singh Randhawa said.

Fearing more attacks, some students even left the campus for their respective residences.

It is learnt that the wardens of the Sabarmati Hostel resigned on “moral grounds” for their failure in providing security to the hostel residents.

Sources close to wardens Ramavtar Meena and Prakash Chandra Sahoo, however, alleged that a group of students cornered them when they reached the hostel and accused them of not providing security. There are reports that some students forcefully made the wardens sign their resignation papers.

JNUSU (Jawaharlal Nehru University Students’ Union) president Aishe Ghosh, who was badly injured in the violence, alleged it was an organised attack.

“For the past 4-5 days, some RSS-affiliated professors were promoting violence to break our movement. Are we wrong to ask for safety from JNU and the Delhi Police?” Ms Ghosh said, adding that the attackers were both from the campus and outside.

Narrating the horrifying incident, witnesses alleged that masked people entered the premises when a meeting was being held by the JNUTA (Jawaharlal Nehru University Teachers Association) on the issue of violence in the campus and assaulted students and professors. They also barged into three hostels.

Students staged peaceful marches to register their protest against the violence in the JNU campus with the hashtag “SOSJNU”.

Shreya Ghosh, a resident of Shipra Hostel, asked how could the goons enter the campus with rods and sticks.

“The attack could not have happened without the connivance of the administration and the police,” she said. She claimed she had to hide in Sabarmati Hostel  after the masked men chased her and some other people. Some of the protesting students at JNU were seen humming poems.